When Kathi and I returned from our excursion on the river, we parted ways for our separate plans that afternoon. She had a date, and I actually had another friend who lived in Vienna whose birthday, as it happened, was that very day. It’s not everyday that you accidentally arrive in your friends city on the other side of the world on their birthday weekend, so we had made plans to catch up for a drink to celebrate both his birthday and my being in Austria.

I’d originally contacted Stephen asking if I might be able to crash with him when I was in Vienna, but unfortunately he didn’t have any room for me in the place that he lived in with his girlfriend. Luckily things had worked out through Couchsurfing in the end, and I just met up with him on the afternoon of his birthday instead. I had met Stephen when I was studying at university – he was on an exchange semester at The University of Sydney, and we sat next to each other in one of our philosophy tutorials. Now, almost exactly a year later, we were sitting at a beach-themed bar on the side of the Danube in the middle of the city, catching up and reminiscing and soaking up the sun. I say afternoon, but it was actually closer to 7pm – what I would have typically called “evening”. But this was European summer, and if we measured parts of the day by how much daylight the had, “afternoon” wouldn’t end until approximately 10:30pm. I ordered another Radler and sat down to tell Stephen more about my travels, and what I was planning to do next, both short-term and long-term. “You could always get a working visa and come back to Europe to teach English,” he had suggested. “I know of a lot of places that are always looking for native English speakers to help adult students perfect the language, especially places in Austria and Germany.” Scenarios flashed through my mind of living in Berlin, teaching English to the locals during the week, and spending my weekends on the dance floor or in a dark corner at Berghain. I could definitely think of worse ways to spend my life, but at that stage I was thinking as little as possible about my life after my year of travelling. I’d been on the road for months now, and I wasn’t even halfway through my journey.

Our mugs of beer and Radler in the Viennese sunshine.

Eventually Stephen had to go, so I wished him a happy birthday one last time as we bid each other farewell. I hadn’t drank too much, and I ended up just heading back to Kathi’s, but that night was still rather significant. After all the travelling I’d done in the past few months, that conversation with Stephen had planted a seed in my mind, an idea in my head – the idea of living abroad. Every following city that I visited, and every time I cast my memory back to the places I’d visited, it wasn’t a question of whether I liked the city or not, but rather, ‘Could I live in this city?’

The following day was my final one in Vienna, and since Kathi had to work for most of the day I figured it would be the best opportunity to do my loop around the tourist ring and see some of attractions Vienna had to offer. The inner city, or Innere Stadt, of Vienna is a designated Unesco World Heritage site, and the architecture easily takes you back to centuries past. I wandered the streets and got a little bit lost, just soaking up in the atmosphere as I strolled past the coffeehouses and other eateries and watched the flocks of other tourists come and go.

One of the older buildings on one of the quieter streets in the city centre.

Some more classical looking architecture I stumbled upon in my exploring.

A lot of the major sights are situated along a tram line that does a consistent ring around the city centre, but after I finally made my way out from getting lost in the Old Town streets, I decided that it was such a nice and beautiful sunny day that I would walk around the ring, instead of staying cooped up on the public transport. Some of the highlights of the sightseeing in Vienna were Stephansdom, or St. Stephens Cathedral, a 12th Century Gothic church that towered above the streets, and the impressive neo-Greek architecture of the Austrian Parliament Building, complete with a gold trimmed fountain depicting the goddess Athena, with the four figures around the base of the fountain representing the four most important rivers in the old Austro-Hungarian Empire. 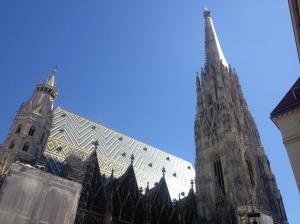 The statue of Athena in front of the Parliament Building.

I didn’t take too many photos, but then I didn’t know too much about all the different sights in Vienna. It was kind of better that way, I think. There was no pressure to see all the important things, like their had been to visit the greatest hits of Rome. I was able to just meander around, stopping when I saw something I thought was interesting, taking the odd picture here and there, strolling through the greenery in the various city parks and just enjoying the relaxing atmosphere the city had to offer. I laid down in grass and had a snooze, had a slice of cake at a coffeehouse – it was all just so chilled out that it didn’t even feel like sightseeing. It just felt like living.

In the late afternoon I met up with Kathi and one of her housemates who had returned the previous evening, Anna-Greta. Kathi had suggested meeting at Naschmarkt, a popular market that had all kinds of amazing foods and fresh fruit and produce, as well as flea market stalls that were selling all kinds of things. Unfortunately I didn’t have much need for all that food, since I’d be jumping on another train to a new city the following day, but it was interesting to check out. Kathi and Anna-Greta bought a few things, and then we sat down to have some food at one of the restaurants that was set up along the market. We ate Thai food – something I hadn’t seen since Thailand – and I told them how popular it was in Australia, and we discussed other cultural differences between Austria and Australia. My favourite moment, however, was when it took us at least a few minutes to translate the word “bruise” from German to English. I thought something was seriously strange when they were telling me how they sometimes got “blue stains” on their skin – it still makes me chuckle when I think about it.

After we’d finished eating, the three of us just hung out at home for the rest of the evening. Anna-Greta had been partying all weekend at a big festival, and all three of us had to get up relatively early the next day, so we didn’t feel like heading out anywhere. Kathi and I pulled out our ukuleles and Anna-Greta grabbed her guitar, and I gave them a couple of lessons and taught them some chords to be able to play a few new songs. I introduced Kathi to Paramore, whose most recent album has a couple of ukulele tracks that I had learnt how to play. She loved the music, and was pretty stoked when I taught her how to play ‘Interlude: Moving On’, and we also learnt how to play ‘Blowin’ In The Wind’, a challenge that Kathi’s other housemate had set for her. Then we just sat around chatting, and the girls told me about parties that they throw, and the music that they play and all the fun that they have, and it made me a little sad to be leaving the next day. “You’ll just have to come back next time we have a party,” Kathi said with a grin. “And at the end of the night we can run around being crazy while we play the ‘Spanish Flea’.” We all laughed, and I smiled to myself, sincerely hoping that one day that would actually happen. I’d made some great friends during my travels so far, and there wasn’t a doubt in my mind that some of those people such as Kathi – despite the distance – would remain my friends for life.