Thankfully, unlike my trek from Ancona to Zürich, I only had to catch one train to get me to Austria. I did have to travel from the western tip to the eastern tip of the country though, but travelling through the mountainous terrain did provide some pretty spectacular, picture perfect views. After the long day of travel I finally arrived in the beautiful city of Vienna and was greeted by my next Couchsurfing host. Kathi was the first female that I was staying with whom I had connected with through Couchsurfing – Susanna in Finland had been a family friend – but I had still found her within my search for hosts in the Queer Couchsurfing group. Robin had showed me how Couchsurfing can be used not just to find places to stay, but also to connect with people who had common interests. I decided that I would probably feel more comfortable staying with gay people while I was travelling, since most of my friends back home are gay, and they would be able to show me some of the queer hotspots – but up until now I had only stayed with other guys. It wasn’t a conscious choice – I think there were just more male hosts available, in general – but when I’d stumbled across Kathi’s profile I’d gotten a really good feeling from it, and she had happily accepted my request to stay with her. I had been tossing up between trying to visit Vienna, or travelling slightly more north to visit Holger – who I met in Barcelona – in Munich, but I had had trouble getting in touch with him, so once again my potential Couchsurfing host had been a real game changer in the direction of my travels. 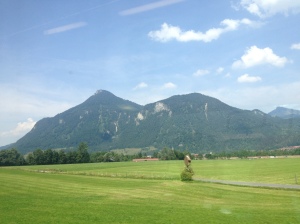 View of the Austrian countryside as I sped towards Vienna in a train.

There was a kind and carefree air about Kathi from the moment I met her at the train station. She was also relatively new to Couchsurfing, so she was pretty excited about having me stay with her. I think the fact that I was Australian helped win over a lot of my hosts – to all of them I must have seemed exceptionally foreign and exotic, all the way from that mysterious land down under. She explained some of the culture of Vienna and the basics of the city to me – such as the ringed town layout and the different zones – while we got caught the metro to her apartment, which she shared with two roommates. “The coffeehouse culture is a really big thing in Vienna”, she advised me. “That’s something most people want to check out. The centre Vienna is divided up into rings, in particularly the main ring that encloses the city centre. Most of the things you’ll want to see or do will be there.” I wondered how I would have coped on this trip I hadn’t had hosts like Kathi, Umer, Ike and Valerio to help know these things about their various cities. I imagine I would have done a lot of unintentional aimless wandering around – as opposed to a lot of the intentional aimless wandering around that I still did.

It was a Friday afternoon the day that I arrived in Vienna, and both of of Kathi’s housemates were away for the weekend. One of them wouldn’t bet returning until after I left, so rather than sleep on the couch in her bedroom, Kathi told me that she would sleep in her housemates room, so and that I could sleep in her bed and have the room to myself. It was more than I had been expecting when I had sent the request to Kathi, and it was probably one of the best set ups I’d had through Couchsurfing so far. As soon as we got to Kathi’s, I had a well needed shower – the countryside views through the Austrian mountains had been postcard-worthy beautiful, but the 7 hour trip had left me feeling less than fresh. “Be careful with the water temperature”, Kathi had said as I entered the bathroom. “It tends to just alternate between… Antarctica and Mordor.” I laughed, appreciating the reference. After the shower I joined my new host in the kitchen. “Are you hungry? I was thinking I could show you how to cook some traditional Austrian food, maybe.” I assured her that her national cuisine of schnitzel had made it down to Australia, but all the same it was fun to help out in the kitchen and do some cooking. We cooked the schnitzel and vegetables, and she introduced me to an Austrian drink called Radler. “It’s basically beer mixed with lemonade,” she said, placing a bottle in front of me. “You can mix yourself or buy it like this.” It was a little fizzy from the added soft drink, but the taste was extremely refreshing, the sweetness balancing our the flavour of the beer perfectly, and I enjoyed it much more than the Rivella I had tried in Switzerland. We sat and ate and chatting, getting to know each other as we downed a few bottles of Radler.

Kathi was particularly interested in picking my brains about the gay culture down in Australia. “What’s it like for gay girls in Sydney? Here, it can be really difficult for…” She was choosing her words carefully. “For more… feminine, girls. Like… sometimes I’m never really sure… You know, of where – and who – they are?” I realised she was talking about her gaydar – her ability to identify other queer people on sight alone. I must admit, the more feminine lesbians have always been the least obvious blips on my gaydar, but luckily stopping them had never been quite such a pertinent issue for myself. Kathi went on to tell me that queer girls also had less places to meet people, citing the recent pride festivities in Vienna, where there had been multiple parties aimed at all the gay men, and only one event that specifically targeted same-sex attracted females. I had to regretfully tell her that gender ratio of gay bars and parties in Sydney was of a similar level, though I won’t pretend I know much about the lesbian scene – not for the first time I pondered on the curious fact that the party scenes for gay guys and gay girls were so divided in the first place.

We continued to talk for hours about gay life, travelling and Couchsurfing, and even music. Kathi was learning how to play the ukulele, so as part of the condition of me staying with her I had promised her that I would show her a few tips I had picked up along the way. I was only teaching myself, but as an acoustic guitar player of nearly 10 years I didn’t have too much difficultly figuring it out. But before it we knew it, it had gotten quite late, so I said goodnight to Kathi and hit the hay after the exhausting day of travelling.

The next day, at Kathi’s suggestion, we caught the train north of her rather centrally located apartment to the banks of the Danube River. It was a gorgeous sunny day, and we had lunch at a little restaurant next to the river that served some excellent Austrian dishes, and of course, more Radler. That wasn’t the most exciting part about this restaurant though – after we had finished eating, I followed Kathi down to the small jetty that was actually a part of the restaurant. There, we hired a small electric motorboat and went for a cruise down the river. “There’s some nice views of the city from the water. Perhaps we could bring our ukulele’s and have a sing-a-long, or something?” Kathi had suggested the previous evening before we had gone to bed. I had told her that that sounded absolutely marvellous, so once we got out on the river I pulled out my ukulele and started strumming away. 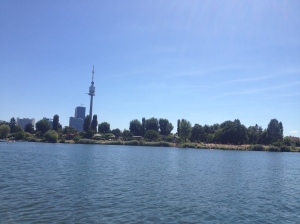 The view of the city from out on the Danube.

The sunshine was streaming down on us as I worked my way through the small repertoire of songs that I had managed to teach myself over the last few months, and Kathi steered the boat up the river. We passed a couple areas that were substitute beaches for the Austrians – the idea of living in a landlocked country with no nearby coastal area still seemed so odd to me – but I have to say, they weren’t as nice as the riverside swimming areas in Zürich, probably because the water in the Danube wasn’t quite clean enough to be drinking quality. But it was still beautiful, and Kathi told me how she often comes down here to bathe in the sun and go for a swim. When we reached a wider part of the river, Kathi killed the engine and we just floated for a little while, watching others glide by us on their paddle boats, and soaking it all in while I strummed away on the ukulele. “It’s so nice,” Kathi said between songs, with a huge smile plastered across her face. “It’s just a nice, holiday feeling, to have the ukulele going in the background while we’re out on the water in the sun.” It was no tropical island getaway, she but was right. Kathi didn’t even end up playing her ukulele, and in the end I was just playing random chords to give the scene a nice and cheerful soundtrack. On our way back to the jetty we passed many boats full of other people, both locals and tourists, and they all smiled at us or exclaimed with delight when they saw or heard the ukulele. It really did feel like a scene from a movie, or even a travel brochure, but it was so much fun, and I couldn’t have thought of a better way to spend the afternoon.

Kathi took a sneaky photograph of me while I was playing the ukulele.

5 thoughts on “Down the Danube”