One thing I would quickly discover about a lot of eating establishments in São Paulo, and eventually other cities in Brazil, was the use of a card with which you keep a tab on your purchases. With the exception of both fancier restaurants and the cheaper, over-the-counter fast food options, most places operated in a cafeteria style where your selections and choices were recorded to a certain number or card, and often the people serving you food were completely separate from the people who would collect your payment. It was an interesting way of doing things, and while it wasn’t exactly foreign to me, I’d never imagined to be such a widespread phenomenon in one specific area. It was a effective and quite streamlined way of doing things, but it wasn’t until I made my first few trips out to the nightclubs of São Paulo that I realised it was also partly a response to improve security in many places.

The evening during my week in São Paulo were spent relatively quietly, having dinner with Fausto or attending a few different events with him – a friend of his was opening a trendy boutique clothing store that was having a launch party with a free self-service cocktail mixing table – you know, as you do. But it was on the weekend, when Fausto didn’t have work commitments the following day, that he really showed me some of the gay bars that São Paulo had to offer. Each night we ended up visiting a few smaller cocktail bars where we would meet with some of his friends before heading to the nightclubs. Some of the places were a bit above my price range, but Fausto generously helped me out with the tabs from time to time – thanks to him, I was able to see a very different side of Brazil that I hadn’t really expected at all. In fact, the affluent and fancy establishments were the complete opposite of what I had been led to believe Brazil would feel like, so it just goes to show that the enormous city really is incredibly diverse.

The first actual nightclub that I visited that weekend was Lions Night Club on the Friday night. There was a queue when we arrived, and upon entering the doors of the venue, every single patron had their ID’s checked and scanned, their details recorded, and their bags and pockets frisked before being assigned with a personal tab card. I was instructed that it was highly important I did not lose this card, because not having it with you when it came time to leave would have you in a world of pain. Once this rigorous security check had been completed, we headed upstairs to the main bar, where I was honestly shocked at how fancy it was. Luxurious looking furniture and seating lined the edge of the large room, a huge dance floor area, a long and extravagant bar located in the centre of everything, a spacious outdoor balcony overlooking the area below and amazing professional lighting and sound systems. I wasn’t surprised to later learn that the event was routinely compared to some of the posh gay bars in New York City – not that I’d gone to anything ridiculously fancy while I’d been in New York, but Lions definitely seemed to fit the bill.

One thing that I noticed while I was in Lions was the way that the tab card system fundamentally changed the way that people behave at the bar. There are the obvious advantages – no one uses cash, so you can’t have to wait for bartenders to count money or give back change, and no one is using credit cards so you don’t have to get stuck behind someone insisting that it must be the machines fault that their card has been declined. You order your drink, hand over your card, the purchase is added to the tab, and off you go. However, for someone like me, who was on a limited budget, it was unnerving because I wasn’t always sure how much the drinks I was purchasing actually cost. The last thing I wanted was to be caught short later with not enough cash to be able to settle the debt when it was time to leave.

The other thing the tab card system affected was the popular, well-established custom of buying someone a drink. Of course, it’s still more than possible to order someone a drink and put it on your card, but it just didn’t seem to be happening that much. Offering to buy someone a drink has long been a pretty standard ice-breaker, in my opinion, but the card system sort of undermined that: “Put it on my tab” doesn’t seem half as fancy or impressive when literally every single person in the bar has one too. I mean, I suppose it’s entirely possible that simply nobody wanted to buy me a drink. But even putting that aside, I just can’t describe the feeling, but it definitely felt different. Though there was the flip side of that very situation: a couple of times I just got handed my drink because someone in Fausto’s group of friends just ordered the drinks and put it onto one card. I suppose that’s a more social way of encouraging people to buy rounds of drinks – a tradition that’s apparently very Australian – although it’s just as easily a way to get roped into footing the bill for round of drinks which might cost a lot more than you could afford. 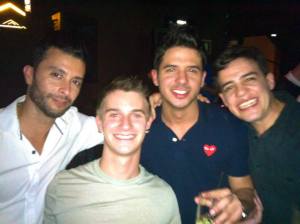 With Fausto and his friends at Lions Night Club.

With all it’s pros and cons, this payment system in Brazilian clubs was perhaps one of the biggest culture shocks I experienced that weekend in São Paulo. I’ve been assured it’s not a particularly new phenomenon and that it exists in many places around the world, but this was my first ever encounter with it. I can’t say that I liked it, but there were other factors such as the language barrier with the bartenders that made the whole set up a lot more difficult for me to navigate. When we were getting ready to leave Lions, we had to line up to hand over our tabs and pay the difference, and of course I somehow managed to end up in the credit card only line. Fausto swooped into rescue me as the cashier was shouting in Portuguese while staring incredulously at my cash, but after he paid her and I paid him back, we had our tabs scanned one last time by the security staff. Only when a green light appeared, indicating we had settled our tabs and owed no more money, were we allowed to exit. Functions like this serve as a way for people to have a night out without having to carry any cash – which I supposed can be ideal for places were street crime  and mugging is relatively high – but it also made me cast my memory back to times when I’d felt terribly ill and had to make a quick getaway from a nightclub, and how that would have been completely impossible with this payment and security system. Nevertheless, it was an eye-opening experience about the ways in which the nightlife in other cultures can operate.

On the Saturday night, we once again started the night with some drinks at a classy low key bar before heading to the nightclub, and I was also introduced to a handful more of Fausto’s friends, luckily most of whom could speak English. The nightclub we were heading to that evening was called Club Yacht. However, all the Brazilians were pronouncing “yacht” in Portuguese, so I really wasn’t expecting what I would totally have been expecting if I had actually known the name of the club prior to arriving there. Club Yacht had been recently renovated on the inside and was, as one would expect, nautical themed. The walls and bars were decorated with mirrors, shells, and trimmings that recalled visions of the lost city of Atlantis, and the whole scene was nicely underscored with blue neon lighting. There was a large dance floor and a well stocked bar, with bartenders dressed in sailor outfits. There was even a huge fish tank towards the back of the clubs near the bathroom. I have to admit, while some themed nightclubs can turn into a horrible and misguided shambles, I was actually pretty impressed with Club Yacht. Of course, there was still the same security procedures and bar tab setup as their had been in Lions, but by now I was getting the hang of that. It felt a little confronting to be subjected to such precautions, but in the end having them in place probably made the whole environment just that extra bit safer.

I preferred Club Yacht over Lions. Maybe it was the fun nautical décor, or that I liked the music a lot more, or that I ended up having a sneaky make-out session with one of Fausto’s friends behind the fish tank (somehow made even more physically charged by the fact he had a very limited English vocabulary), but I really had a good night on the crowded dance floor. We’d arrived at about 1:00 AM, having lost an hour to daylight savings, but we stayed well into the early hours of the morning. When it came time to leave, Fausto insisted that he show me a place that was something of an entity in the post-nightclub eating world of São Paulo: a place called Boston Bakery. A 24 hour eatery that is much more impressive than the simple name suggests, it was a hybrid café/restaurant that served such a staggering variety of foods that I was quite torn when it came to deciding what to eat. Some of Fausto’s friends opted for sweets or baked goods, such as those you would expect from a bakery, but my post-drinking stomach usually has a craving for a burger, and there was a selection that could be ordered off the menu.

Apparently Boston Bakery can be completely packed out during the day, especially for things like weekend brunches, but at a modest 5:00 in the morning there weren’t too many other diners to share the place with. Again, we were issued with numbered tokens when we entered the building, and rather than waiting for the waiter to bring over a bill at the end of the meal, we simply had to flash our tokens and pay for whatever we had ordered on that number. After that we walked home through the cool dawn air and spent the majority of Sunday sleeping.

I was lucky to have had Fausto to guide me through the nightlife of São Paulo. The combination of being a thrifty traveller and having lived a stones throw away from the gay nightlife in Sydney meant that I still had a bit of an aversion to getting taxi’s if I could help it. But if there was one piece of advice that I would give to absolutely any traveller in São Paulo, it’s that taxi’s are definitely your best friend. Especially at night. Usually I’m pretty adventurous, although I think if I’d been left to my own devices and tried to navigate my way around the concrete jungle at nighttime via public transport, I feel I would have been telling a very different story in this blog – if indeed I’d even made it out alive to tell the tale. But as luck would have it, I was blessed with some friends who were more than happy to take me out and show me a local perspective of São Paulo nightlife.

3 thoughts on “Bars, Boys and a Bakery: São Paulo Nightlife”