Angkor Wat is undoubtably the main tourist attraction of Siem Reap, and with very good reason – the temples are simply stunning and the sunrise will take your breath away. However, rather than spending the three whole days I had allowed myself in Siem Reap exploring the temples, I decided to take some time to wander around the town itself. It isn’t as developed and busy as Phnom Penh, but Siem Reap is far from isolated, and the proximity to the temples has turned it into a rather chilled out little community that caters well to the tourists who have been trekking through the ancient temples and require a take a break from the intensive sight seeing.

Statue in the park next to the river that flows through the town.

The first thing that I loved about Siem Reap was that it had a street called Pub Street – as if that isn’t pure brilliance, right? And it’s not just a name – the street is lined end to end with pubs, bars, restaurants, cafes and clubs. I spent all my afternoons in Siem Reap choosing a new venue, sampling the menu, and swigging on a couple of 50c mugs of draught beers. 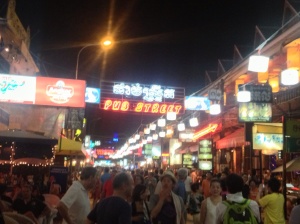 To my surprise, I also passed a small venue called The Wine Station Bar, which proudly displayed a rainbow flag in its major signage. Chuckling to myself at the fact I had somehow been drawn to what I thought must surely be the only gay bar in the village on my first afternoon stroll around town, I saw on their advertising that the following evening would be one of their main nights of entertainment, so took note of the location with plans to return the next night.

It was a tiny little bar, but it was a stylishly decorated lounge with a stage in the middle of the long narrow room. I hung around for the evening watching all the performers, laughing and cheering snd having a few cheap cocktails. I’m honestly not sure whether the performers were drag queens or ladyboys, but whatever they were, they were doing it well. Their lip syncing, however, left a lot to be desired, but it was actually quite endearing to see them giving it their all, given the fact that none of them were exactly fluent in English. They put on stellar performances all the same, and I enjoyed myself immensely. Being in that kind of environment was almost like a little slice of home for me, and for a moment I imagined I was back in Sydney, drinking from a bucket at Stonewall and watching all my favourite drag queens take to the stage. When I walked past the stage to go to the toilet, one of the two drag queens on stage at the time reached down, grabbed my head, and planted a huge wet kiss on the side of my face, smearing makeup all over my chin and jaw. Yep – now I definitely felt at home.

The drag number during which I was the receiver of a very colourful kiss.

To return to the other end of the tourism spectrum, I also visited the Angkor National Museum on my last day in Siem Reap. It’s a nice building with some gorgeous interior architecture, though unfortunately photography of any kind inside the museum is strictly forbidden. The museum has several large galleries that contain a range of different statues and structures that have been lifted out of the ruins of Angkor Wat and brought here for preservation and display. You can learn all about the history of the temples and the meanings behind their details and designs, as well the strong religious connections that exist in many of the structures. In retrospect, it’s probably a good idea to visit the museum before you explore the temples of Angkor Wat, allowing you appreciate the knowledge while experiencing the temples first hand, but it was still an enlightening experience that I definitely recommend to anyone who is visiting the temples while in Siem Reap (although if you’re not visiting the temples, you’re doing Siem Reap wrong).

Outside the Angkor National Museum.

The one other thing that seemed like a major attraction in Siem Reap were the fish foot massage tanks that littered the streets. I supposed there is quite a good market for them, with many tourists spending hours and hours and even days upon days on their feet, exploring the vast temple complexes – what better to cleanse and relax your feet than have dozens of tiny little fish come and give you a tickling massage? The fish don’t actually bite you – they simply nibble on the surface of the skin, eating any dead skin calls and leaving your feet feeling smooth and fresh. The feel of their tiny mouths was so bizarre at first that I’m fairly sure I let out a little squeal and wrenched my feet from the tank, but I forced my feet back in until I finally became used to the sensation. I had my fish foot massage after visiting the Angkor National Museum, which takes a good three of four hours to see everything and absorb all the knowledge, so after being on my feet so long it turned out to be quite an enjoyable experience. 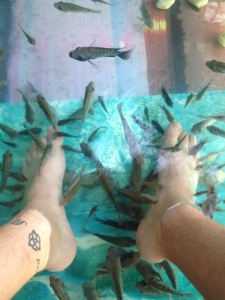 Fish foot massages are a great little treat after a long day on your feet.

Nothing too wild or crazy happened in Siem Reap. If truth be told, I spent a lot of time at the hostel enjoying the private room I had gotten. I was unsure as to when I might have such a luxury again, so I intended to make the most of it. However, I enjoyed my time in Siem Reap a great deal more than I ever would have expected. The quaint little town is full of fun treats and surprises, and I implore anyone who passes through to take the time to see what the town has to offer, and not spend all of your time at the temples. I guarantee that you won’t regret it.

1 thought on “The Unexpected Delights of Siem Reap”