During my stay in Ho Chi Minh City, I thought it was only appropriate that I explore a little more of Vietnam before heading off to the Cambodian border. After sussing out the logistics of my various options, I decided that heading south to the Mekong River delta would be the most interesting and diverse experience. The day trip involved a two hour bus ride out of the city, so I rose uncharacteristically early that morning and trudged onto the bus still half asleep, yet curious to see what the wider country of Vietnam would have in store for me.

The Mekong River is the largest river in Asia, starting in Tibet, and flowing through China, Laos, Cambodia and Vietnam, where it divides into 9 tributaries that all flow out separately into the South China Sea. The south of Vietnam is known as the ‘Rice Bowl’ due to the established crops and farms throughout the region. The real tour started at a riverside town called My Tho, and from there we walked through the jungle on a small undergrowth trail until we reached the river.

From there we got into small wooden row boats that took us down a narrow river system that was surround by thick vegetation on each side. We weren’t too far from the main roads, but we were well and truly out of the city now, and floating down the river in the long rowboat really gave me an idea of Vietnamese culture that was probably a little more traditional then either of the living situations I had experienced so far. The short trip took us to a modest little business that turned out to be a factory for making coconut candy. We were able to taste some of the sweet substance right as it came out from melting and thickening over the fire – it tasted a bit like fudge – and were given the opportunity to buy some. That was the first inkling that I was on a tour that I’d heard been referred to as a “tourist trap”, where the initial cost of the tour is cheap, but all the extras come at an additional cost, and almost every stop along the way tries to sell you something.

The smaller, secluded sections of the Mekong River.

After we had concluded business at the candy factory, our tour guide fetched a hessian bag, reached inside and produced a snake from within the depths of the sack, immediately offering it to individuals in the group to pose with it and take photos. Luckily I had faced and conquered my fear of snakes back in Bangkok, otherwise my reaction to the surprise might have been extremely embarrassing. On the contrary, I couldn’t wait to get my hands on the reptile – or to be more accurate, to get the reptile around my shoulders. I thought back to the fearless little ten-year-old boy I had been when I visited the Steve Irwin’s Australia Zoo in Queensland, itching to get my photo taken with the huge python, and realised that I’d come full circle again. I didn’t even flinch as the tour guide draped the snake over my shoulders and looped it around my neck. 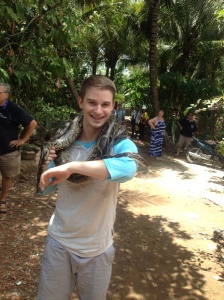 Getting friendly with the locals.

After the reptilian meet-and-greet, we jumped on another larger boat and headed down and across the river to another town named Ben Tre. We had lunch at an elephant fish ear farm – large flat fish that resemble their namesake. However, that particular delicacy was another tourist trap that wasn’t included in the price of the tour, though I’m not a huge fan of fish and was able to settle with tour included beef and rice dish. I sat at a table with two couples – a pair of British 27-year-olds taking their annual holiday, and another retired British couple who now lived on the Sunshine Coast in Australia. They were all very nice and interesting to talk to, although I’d been hoping I might meet some more people like myself, solo travellers or backpackers. Groups and couples tend to already have their itineraries firmly set out, so I just had to enjoy their company for the day before writing them off as what Tyler Durden would call “single serving friends”.

Photo on the larger boat, taken by my new temporary friends. 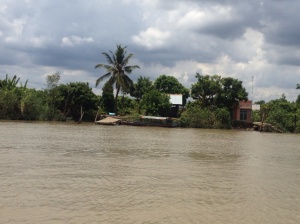 View of the wider part of the river from our larger boat.

Pool of elephant ear fish at the farm.

The last stop of the tour was the centre of the town, where there was a temple complex with several pagodas and statues of Buddha. I hadn’t gotten around to visiting a similar site in Saigon, so I was glad to be able to make up for it here instead, though the more I saw of South East Asia, the more similarities I began to see in all these temples and monuments. Which doesn’t make them any less holy or worthy of reverence – it just means you can’t spend quite as long marvelling in awe at them when you saw that temples bigger cousin in a different city. Overall, my day tour on the Mekong River was pretty average. I guess being a day tour it was obviously going to feel a little rushed, but there was nothing particularly amazing or breathtaking about it. Although it was nice to get out of the city and see some more the of the country of Vietnam, no matter how briefly.

One of the more solemn shrines at the temple.

That trip happened during the middle of my week in Vietnam. To stick to my river theme and spare you from any more river references in my blog titles, I’m going to throw chronology to the wind even further and tell the short story of my departure from Ho Chi Minh City…

After a slow day of recovery from my last night in Saigon, I hopped on an overnight bus towards the riverside town of Chau Doc. Not wanting to travel all the way to Cambodia via bus, I had decided to split the trip up by traveling to a border town on the Mekong River, staying there for a night or two, and then catching a boat up the river to Phnom Penh. It wasn’t as cheap as a bus, but I figured it would be a great way to see some more of the countryside, as well as being one of those rare opportunities to listen to Lonely Island’s I’m On A Boat and giggle smugly to yourself at the accuracy of the content.

Though for all the research I had put into transportation, I hadn’t bothered to investigate too much into the town of Chau Doc itself. Crawling off the bus at 5:30am, I was unimpressed (mainly with myself) to find myself alone in a tiny riverside town, where hardly anyone spoke English, at a time where hardly anything was open. “Cheap hostel,” I managed to convey to a motorbike taxi, and we roamed the streets for about 20 minutes, moving from closed hotel to closed hotel. Eventually I gave up and repeated “boat” while pointing at an address in the Lonely Planet guide, and my taxi driver seemed to figure out what I wanted. I found myself sitting at a dock on the river, half asleep while I waited for the world itself to wake.

The town of Chau Doc in the grey light of dawn.

Despite the dull light of the dawn, my short ride around the city had proved to be very illuminating. There didn’t appear to be any major tourist attractions here, and the level of English speaking locals seemed to be at a concerning low. I could see things going very wrong very quickly in a place like this, and after the bus ride I had just had, it was something I did not want to deal with. In a split second decision I changed my mind, and my stopover in Chau Doc went from a couple of days to a couple of hours, in a couple of seconds. 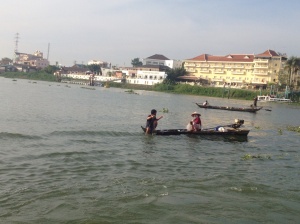 Setting out as the sun rises.

Luckily there was room on that mornings boat, so after only a couple of hours of being in Chau Doc, I was speeding up the Mekong River to the Cambodian border. My companions for this voyage turned about to be a bunch of Americans from Philadelphia who were doing a tour through South East Asia as part of a masters program. They were all extremely friendly, and they took me under their wing when we went through the border crossing process, which I was thankful for, since this was the first overland border crossing I’d ever done. It’s a feeling of sheer terror handing your passport over and one check point and then not getting it back until the next one. Once we got back on the boat from the Vietnamese exit point, the rest of the Americans had their passports returned, but mine didn’t come back. I knew it must have been because I still had to get my visa, while the others had obtained theirs in advance, but all the same, it’s still an uneasy feeling.

The boat provided some scenic views of rural Cambodia I might not have otherwise seen.

But it all went up without a hitch, and I spent rest of the 6 hour boat ride to Phnom Penh chatting to my new American friends, admiring the rural scenery and nodding in and out of consciousness – to say the least, it had been a very long morning.