After an exhausting weekend that nearly destroyed me, I decided to take some time out of the crazy Berlin party scene and do a couple of touristy things. Of course, I needed at least a full day just to receiver from the messed up sleeping patterns and diet that consisted almost solely of booze and currywurst. But on Tuesday, when I finally felt human again, I set off in the morning to do a self-guided Trip Advisor walking tour of Mitte, the central district of Berlin, also known as the Government Quarter.

But before I begin that recount, I need to do my obligatory rant, or rave, on the public transport situation for a new city. And I have to say, notwithstanding the train delays on my journey to actually get into Berlin, I am in love with their local train services. There are two kinds: the S-Bahn, which runs above ground and are actually integrated into the national rail system, and the U-Bahn, the underground trains that are essentially the German version of a metro. Trains on all lines come frequently at regular intervals, and between these two highly integrated networks, it’s possible to get almost anywhere in Berlin with relative ease, although there are so many different lines and interchanges that it can be a little difficult to wrap your head around at first. The only real issue I had with the U-Bahn and S-Bahn was the price of a ticket: €2.80 for a single trip seemed a little steep in my opinion, but then I guess I had still be paying student fares in Sydney right up until I left – welcome to the real world, kid. Although there’s one tip I can offer that you won’t read in any Lonely Planet book – there’s no barriers at the stations for which you need a ticket to pass through, and checking for tickets on board the train is very infrequent. Now I’m definitely not condoning fare evasion, but… there a few short trips I make where I felt it was worth the gamble. So for a system that is well-established, efficient, and if you can’t get away with it, free, Berlin public transport gets a general tick of approval.

The first stop on my walking tour was the Brandenburg Gate. The most famous of all the east-west crossings of the Berlin Wall, it’s a symbol of the division that once ran through the city, though during my time in Berlin I’d learn that while the wall came down in 1989, distinctions and differences between East and West Berlin are not unrecognisable. Visually, the gate is probably the most iconic feature of Berlin, so I posed for a photo before continuing through. The time I was in Berlin also coincided with a visit from the US president Barack Obama, and so Pariser Platz, the square in front of the Brandenburg Gate, was full of security guards and scaffolding, as some type of arena seating was erected in the clearing. I passed through the arches of the gate from east to west to find the Tiergarten stretched out before me, and turned right to head towards the Reichstag, the German parliamentary building. According to my Lonely Planet guide book, there was a popular and impressive view of central Berlin from the glass dome ceiling of the Reichstag, and that it was free to go and see. What the guide book failed to tell me was that you needed to make a booking prior to your visit in order to secure your spot on the viewing platform. Slightly disgruntled but not really that bothered, I left the bustling tourists to their lining up and headed back towards the Tiergarten. 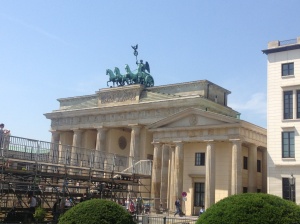 The Brandenburg Gate, with just a suggestion of scaffolding.

In front of the Brandenburg Gate.

The Reichstag, the parliamentary building which I unfortunately didn’t get to enter.

The Tiergarten is a huge expanse of greenery right in the centre of Berlin. I don’t know much about it historically, other than it being the name of a Rufus Wainwright song, but it was beautiful place to stroll through a park and lose yourself in the gardens. I made an arching route in and out of the Tiergarten, admiring some statues along the way, before emerging at the haunting piece of artwork that is the Holocaust Memorial. The memorial is a collection of 2711 pillars, all evenly spaced apart across 19,000 square metres, and which appear to be of a roughly similar height. However, as you walk into the grid you begin an unexpected descent, and discover that the ground is uneven and awash with hills. When you enter the grid, the pillars come up to your knees. After a few moments, they’re towering above you, and the only thing you can see in all for directions are long corridors created by the towering monoliths, and the occasional other person who crosses your path along the way. As I emerged from the memorial, I took a seat for a moment and reflected on the reason it was there, and who all the pillars represented: the victims of the Holocaust. Each one was the same essential structure, a homogenous collective, yet each pillar was also individual in its unique height. I’m not sure if that’s the actual rationale behind the memorial, but it struck me as somewhat symbolic. Afterwards I took a photo with the memorial, as a tourist souvenir – only afterwards was I told about a website that makes fun of men who use such photos taken at the memorial as their profile pictures on online dating sites – there happens to be quite a lot of them! That was a little embarrassing, but I just made sure to never upload the picture to my Grindr profile.

Lion statue in the Tiergarten.

Holocaust Memorial: view from above…

… and the view from below.

After the memorial I headed back east and eventually reached Museums Island, a block of land that is surrounded by canals, so technically an “island”, and is home to a cluster of art museums. I had a wander around, admiring some of the beautiful buildings, but decided I wasn’t really in the mood for museums. I continued along the path, looking at a few churches and stopping for a photo with the Karl Marx stature – the sociologist in me just couldn’t resist. Eventually I arrived at Alexanderplatz and the TV Tower. It’s not a particularly pretty building, but it is tall, so I went inside and took the elevator to the top. The TV Tower is one of the few sky scrapers in Berlin, and by far the tallest building, so it provided a complete panoramic view of the city, although it was so high up that so many of the sights were minuscule and almost unrecognisable – even the Brandenburg Gate looked no higher than a couple of centimetres from up there. There was a fancy rotating restaurant at the top of the tower, but I decided to save my euros and eat at Hackescher Markt, a nearby market down on the ground. I think there might have been more of the Trip Advisor tour, but the day had involved a lot of walking and I’d found myself rather exhausted. For something that’s isn’t really extremely exciting, sightseeing can be exhausting. I finished my lunch and jumped on the U-Bahn to head back home. 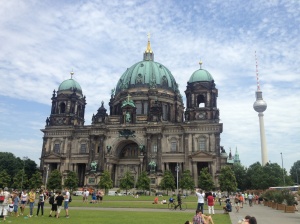 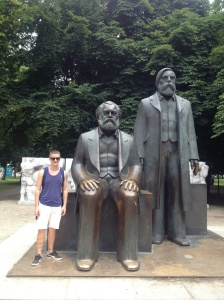 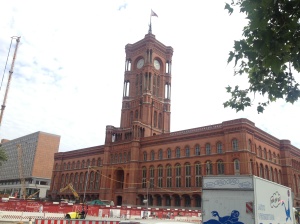 The Rotes Rathaus, or Red Town Hall, near Alexanderplatz. 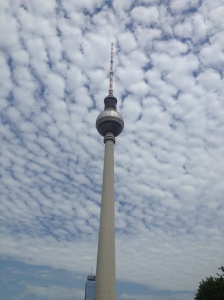 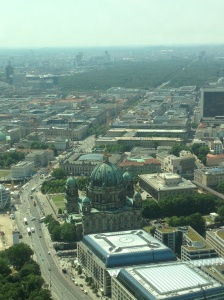 View of Berlin at the top of TV Tower, from the Tiergarten to Museums Island – essentially, what I’d just walked.

The only other touristy sightseeing I did during the week was a few days later when I visited Checkpoint Charlie, where you can still see the sign that “You are now leaving the American sector”, a remnant from the days of the war. However, with the men in uniform trying to sell you pictures with them, it’s all a little gimmicky and so full of tourists that I could only bring myself to stay for a short time. I would have visited the Jewish museum, but the weather had gotten so hot over the past few days I could bring myself to walk the rest of the way. It was there at Checkpoint Charlie, though, that I reached something of a turning point within myself: I made the conscious decision that I wanted to be a traveller, not just a tourist. I didn’t want to just check off the list of sights listed in the guidebook and take photos in front of the famous monuments – I wanted to experience what the city was really like, meet the locals and see things from their perspective, and see what Berlin was for them. Being a tourist can be exhausting, with the weird pressures you can feel from people to “do everything” and go to all the “must see” sights. For me, being a traveller is all about doing whatever you wanted to do, and going places that you actually want to be. I’d seen some of the wild and crazy sides of Berlin, and if was looking for more of that, I definitely wasn’t going to find it in a Lonely Planet book.