After a decent nights sleep at Valerio’s house, I woke up feeling remarkably refreshed and ready to take on Rome. I had been told by almost everyone who had visited Rome that the city was enormous, and that if you didn’t have a plan of attack you could easily waste all your valuable sightseeing time trying to find your way around the maze of combined modern and ancient history. Lucky for me, I had met Selma in Barcelona, who had seemed more excited than I was at the fact that I was going to Rome. We had exchanged contact details, and at some point during my stay in Madrid she had sent me a huge message that had included a list of all the famous sights, monuments and neighbourhoods, as well as a detailed itinerary of how to make the most of all these things and visit as many as possible in the three days that I had to explore Rome. I felt a mix of overwhelming gratitude and guilt – I hoped she had already had this itinerary written down and had just forwarded it on to me, because what I got had been so much more than I had expected when I’d asked for “a few tips”. Nevertheless, she had saved me a great deal of planning when it came to all that touristic stuff that I’d never really been any good at.

As convenient as getting to Valerio’s house from the airport had been, getting from Valerio’s house to central Rome was somewhat more of a challenge. I had to get a bus to the closest metro station, and then from there catch the metro into the heart of the city. The whole trip should have only taken me half an hour if the public transport ran on time, but I was about to learn very quickly that literally nothing in Italy runs on time. So it took a little longer. Given the size of the city, I was also surprised that Rome only had two metro lines that ran diagonally across the city and intersected only once or twice in the middle. Cities like Moscow, Berlin, Paris, Madrid and even Barcelona all had upwards of around fifteen metro lines, so it was puzzling as to why Rome was so far behind. Valerio would later tell me that the city was working on a third line. It’s completion was scheduled for approximately somewhere in the next several years – Rome wasn’t built in a day, I guess?

When I finally reached central Rome, my first stop was Piazza del Popolo, a large public square with a huge obelisk towering over the tourists crossing the plaza. From there I following Selma’s directions and climbed the stairs up to Pincio Hill. The top of the hill was a beautiful and quite peaceful garden, a stark contrast to the hustle and bustle of the lower streets of Rome that I had been in so far. It was also a spot that afforded excellent panoramic views of Rome, so I stopped to take a couple of photos before wandering through the greenery. I followed the edge of Pincio Hill until I rather unwittingly walked down the next attraction, Scalinata della Trinità dei Monti: the Spanish Steps. It wasn’t until I reached the bottom and arrived at Piazza di Spagna, thought to be the most famous square in Rome, that I turned around and took in my surroundings. The square is a common rest stop for tourists wandering the city, so it was quite crowded, and at the top of the steps sat the French church Chiesa della Trinità dei Monti. 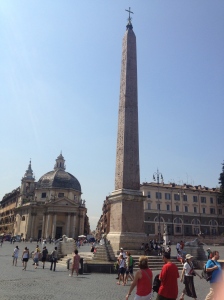 The obelisk in Piazza del Popolo. 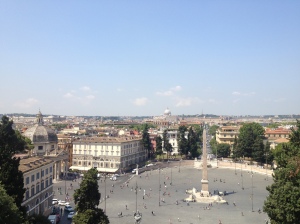 The view of Piazza del Popolo from the top of Pincio Hill. 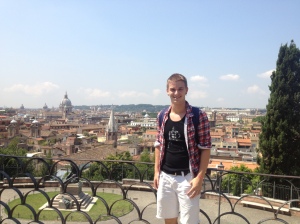 View of Rome from the top of Pincio Hill. 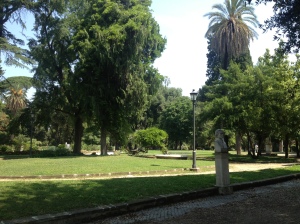 The garden on top of Pincio Hill.

At the foot of the Spanish Steps I came across my first Roman fountain, the Barcaccia, sculpted in 1627 in the style of a sinking boat. Valerio had told me that the water in all of the fountains around Rome was safe to drink. I hadn’t understood at the time, but I would soon learn that similar fountains were scattered all around the city, and thirsty tourists and locals alike could be seen stealing a sip from the flowing water, or filling up their water bottles. The water all comes from clean underground springs and is completely safe to drink as it pours out of the fountain. It was a cute little feature of the city, and particularly convenient given how hot it was that day, and all the walking I still had left to do. From Piazza di Spagna I walked down Via dei Condotti, the posh shopping strip of Rome that was lined with expensive designer and luxury brands. It was an amusing juxtaposition, to see such expensive and modern designer brands in the shop fronts that were situated in some of the oldest streets in the world. Though the entire city of Rome was full of such contrasts – modern stores that were built a few months ago stood side by side in the street with structures that had been standing in place for over 3000 years. For someone who comes from a country as young as Australia, it was a strange concept to fathom. 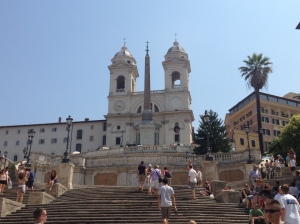 The Spanish Steps and the church at the top, as seen from Piazza di Spagna. 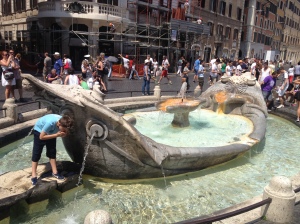 At the end of that street came the Trevi Fountain, one of the more well-known and more highly anticipated sights of Rome. The crowds around the fountain were unbelievable – it was almost impossible to get a photo without someone else being the photo. I actually saw a couple of fights break out between groups who were trying to take photos while other groups were getting in the way. It was actually quite frightening, and at that point I decided I wasn’t going to stay in any areas heavily populated by tourists for any longer than necessary. It was at that point that I broke away from Selma’s itinerary, although not entirely intentionally. I thought I was following her directions to another plaza, but after a while I emerged into a clearing to behold the Pantheon, another instantly recognisable sight. The 2000-year-old temple is now a church, and one of the best preserved monuments in Rome. It was beautiful, both inside and out, and the dome in the roof that is considered to be the ancient Romans greatest architectural achievement allowed a cylinder of sunlight to pour in from the sky. It was a little eerie, but also gave a rather holy feel to the aesthetic of the huge old room. I wandered around the inner chambers and admired some of the artworks and decorations before taking leave back out into the midday sun. 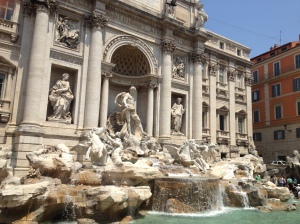 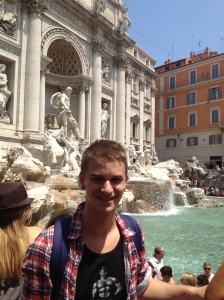 In front of (or as close as I could get to) Trevi Fountain. 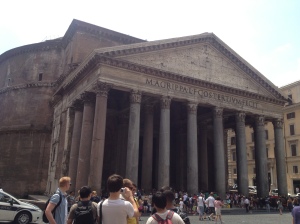 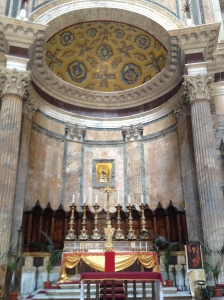 Alter inside the Pantheon. 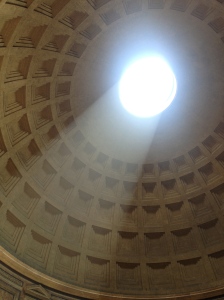 Sunlight pouring through the dome in the roof of the Pantheon.

A few short streets later and I found myself at Piazza Navona, a long plaza that is home to several fountains, the most famous of which is Fontana dei Quattro Fiumi, the Fountain of Four Rivers. The plaza was full on tourists, but it also seemed to be a popular place for buskers, street performers, artists drawing both realistic sketches and caricatures, and peddlers selling all kinds of souvenirs and trinkets. It reminded me a lot of some of the heavily touristic areas in Paris, and I stayed for long enough to observe some of the interesting things going on, and take a few photos of course, before heading off and moving on. 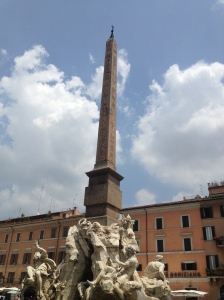 The Fountain of the Four Rivers, the centrepoint of Piazza Navona. 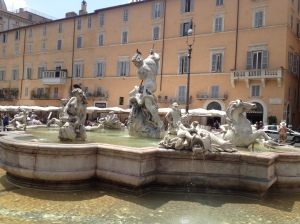 The Neptune Fountain in Piazza Navona. 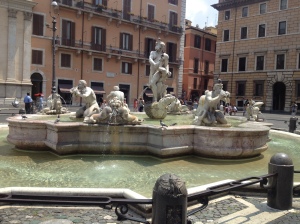 There were a few other things on Selma’s itinerary for the first day, but they were more missable things such as places to eat or where to get some good gelato. I would have followed through and investigated, but by that point I was completely exhausted. My body still hadn’t fully recovered from the breakdown in Madrid, so I ended up grabbing some quick take away food before heading back to Valerio’s to rest and recover for the remainder of the afternoon. I know, it seems sacrilegious in a city and country known for some amazing cuisine, but the last thing I felt like doing was sitting down at an overpriced tourist restaurant by myself. However, I did swing by the Termini train station on my way home, so that I could book my tickets out of Rome for a few days time. On my way there I passed a building which I later learned to be Monumento Nazionale a Vittorio Emanuele II, the Alter of the Fatherland, the National Monument for Victor Emmanuel II, which had also been on Selma’s itinerary. It’s a controversial monument that was built in honour of the first king of unified Italy, and also holds the home of Italy’s Tomb of the Unknown Soldier and the accompanying eternal flame. 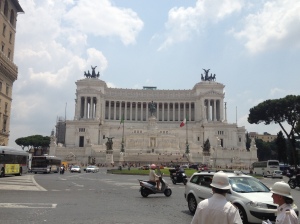 After waiting an hour to be served and book my train tickets (again, this is Italy, so no surprise there), I took the metro and the bus back home to Valerio’s. Considering I was far from my peak physical condition, I felt I had done a decent job of sightseeing for the day. Rome wasn’t built in a day, and you certainly can’t see it in one either, so I had a quiet and early night, making sure I got plenty of sleep to continue the exploring tomorrow.