For a city that has a handful of extremely recognisable and world famous icons, I didn’t do an awful lot of sightseeing in Rio de Janerio. James had mentioned the cable car ride to Sugarloaf Mountain, a pretty popular tourist attraction on the eastern edge of the city. Though, when I’d probed Tom about it later, he had shrugged, appearing pretty indifferent.
“I mean, yeah, it’s a great view,” he said. “It’s one of those things that everyone just does, know you? Almost without thinking about it. If you do go, just make sure it’s on a day when the weather is nice and clear.” I’d taken the advice into account, but there was no denying that on the bright and sunny days, the allure of the beach down the road was far more powerful than any urge to climb a mountain. The same could be said for Christ the Redeemer – the journey to actually get up the mountain to the base of the monument wasn’t a breezy walk in the park, and I can’t admit to having any strong spiritual calling from Jesus to go look at the huge idol up close. So I settled for the glimpses that Tom and I had had of the statue through the clouds on our hike a little closer to home, satisfied that I was probably experiencing a few more interesting things in Brazil than statues and landscapes.

But there was one other sight in particular that James had described that had piqued my interest much more than either of the mountains. “There’s the steps at Lapa,” he’d said as he rattled off a quick list of things that would be worth seeing, and perhaps it was the fact it was something I’d never actually heard of that made me research the steps and eventually want to go and see them. I jumped on Google and did a brief search of some of the other sights in the area – Lapa was a neighbourhood closer to the centre of Rio de Janeiro – and on one of the afternoons where Tom was at work, I set out via the bus and metro to explore a little bit more of the city.

I found Rio to be a curious city because it felt very decentralised. I’m much more familiar with the concept of a city centre, an obvious hub of activity that has a greater population density, is usually a little more expensive than the rest of the city, and has lots of things to see and do and entertain the tourists. But as soon as I stepped off the metro and emerged into the more central streets of Rio, I realised this wasn’t the case. The touristic focus of the city is by and large the coastal areas, and the regions that have the gorgeous beaches and natural beauty within the landscapes. That’s what people want to do and see when they come to Rio – I too had been primarily more interested in catching some rays and working on my tan than I ever had been about the sights I was about to visit.

Now, Rio is a pretty big city, so maybe there was a more accurate, central hub that I didn’t know about. To be fair, most of the city it actually based long the coast, around the mountains and the landscapes, and so the “centre” really just seemed to be the midpoint between the northern and southern parts of the coast. But the area I was in looked not far off being a ghost town. A lot of the buildings looked particularly old and run down, graffiti and litter were present – not overwhelmingly, but consistently – and I was very quickly introduced to another far less glamorous side of the city, which I had a feeling didn’t see half as many tourists as the beaches at Copacabana or Ipanema. It told a different story, a toned down version of the rife poverty that existed in the favelas over the hill, the concentration of the Brazilian slums. It was actually quite confronting, and for the first time during my stay in Rio I actually felt the mild presence of danger and the need for a little more caution than usual – a fear that I had been secretly harbouring about the city yet had never before now been actualised. But I kept my wits about me and moved on, taking a few photographs of the significant buildings and trying me best to not look too much like an ignorant tourist. Firstly there was the Teatro Municipal, considered one of the most important and beautiful theatres in the whole of Brazil. 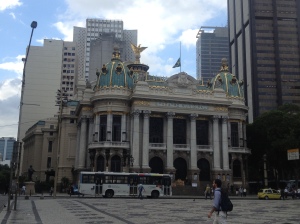 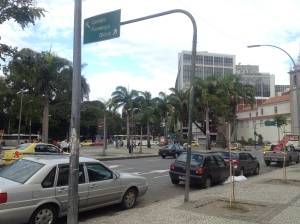 The relatively quiet centre of Rio.

After that I made my way further west over to Lapa, where there were two more sights that I had read about. The first was the Arches of Lapa: the ancient Carioca Aqueduct. When I first read about them, I assumed I had just misheard James say ‘steps’, but they were actually something else entirely. I have to admit, I was expecting a little more than what I saw. To be fair, there was nothing misleading about the name – the were definitely arches. However, they’re been described as great architectural feat, a landmark of the city, and I couldn’t help but feel a little disappointed when I discovered the building looking particularly dirty on one end, as though it had suffered some major neglect. Although in the end it all ended up feeling rather fitting for the ghost town vibe I was starting to get from the area. 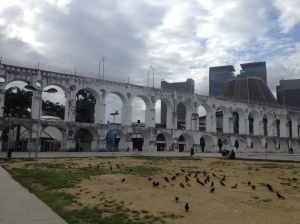 But as I followed my directions down a few small side streets, levels of fear and uncertainty slightly but gradually rising, I turned a corner and instantly felt like I was in another city, with an entirely different mood and atmosphere. Escadaria Selarón – Selarón’s Staircase, or the Steps of Lapa – loomed ahead of me, an explosion of colour that appeared seemingly out of nowhere in the otherwise dank and drab corner of the city. 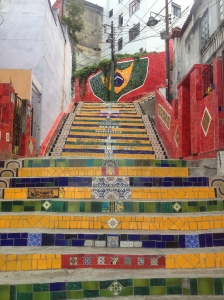 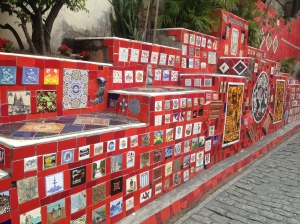 The entire staircase was decorated with an array of coloured materials. 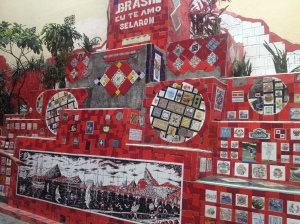 There was so much intricate detail in the ceramic installation.

Honestly, I hadn’t done that much research into what the steps actually were, so I was completely blown away when I stumbled across them. The entire staircase had essentially been turned into an artwork, with barely a patch of free cement that wasn’t adorned by a tile or ceramic in some way. There were words in the steps, there were flags, there were pictures – it was such a complex and diverse range of colours and images, there was nothing you could do but slowly ascend the staircase while marvelling at the walls around you, taking care to not trip up them in the process. There was a substantially larger amount of tourists on the steps, too – it seems as though this is one of the few attractions that people venture out this way to actually visit. I took my time picking out some fellow tourists who seemed trustworthy enough, and asked them to take my picture on the steps. 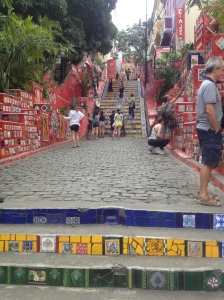 Other tourists marvelling a the ceramic artwork. 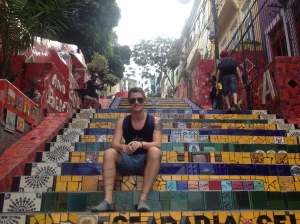 Sitting on the steps of Lapa.

It was actually quite a long staircase, and as I climbed further I realised that the staircase was actually a street. There were houses along either side, front doors opening directly onto the staircase, and I few times I actually noticed Brazilian families coming and going from their homes. I wondered what it must be like to literally live on a tourist attraction – frustrating at times, but surely a beautiful backdrop to spend even the most relaxed and casual days of your life. When I reached the top, it was interesting to gaze back down the steps and realise how unremarkable they looked from above. Almost all of the tiled surfaces faced downwards, and you could only really be confronted with all the colours as you climbed the staircase. I sat there at the top of the steps, partly to sit and marvel at the complexity and beauty of the whole thing, and also partly because I had discovered an adorable little stray cat which I couldn’t stop photographing. 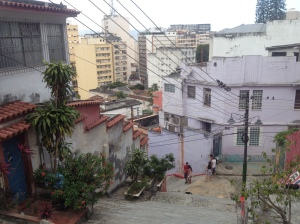 The view from the top of the steps. 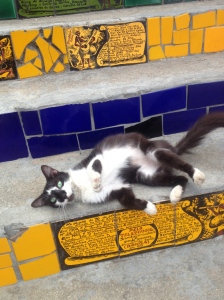 The cute little stray that I stumbled across. 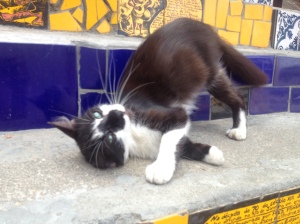 Seriously, he was probably the highlight of my day.

The steps were really interesting though, and something I was so glad I had taken the time and effort to go and see. Now, whenever I see a movie that’s set in Brazil and there is a visual of the steps at Lapa, no matter how brief or insignificant, I can’t help but shout out “Hey, I’ve been there!” to anyone who will listen. It wasn’t a hugely popular attraction, such as, say, the Eiffel Tower, and I think the fact that there were less people made it even more memorable, and something that I really will carry with me for the rest of my life.

That day was the only real sightseeing that I did while I was in Rio. After seven months on the road, it’s a little difficult to muster up the enthusiasm for that kind of thing all the time, but I felt satisfied with what I had managed to see. The rest of the sunny days I spent hanging out with Tom, going to the beach with him and James, and for the most part just relaxing and taking it easy. People sometimes underestimate how taxing on your mind and body travelling can be. Sure, it’s essentially an extended holiday, but you’re constantly moving your body around from one unfamiliar environment to the next, and all the new things you see and learn about and discover can build up to overwhelm your mind. Rio provided the perfect opportunity for me to just kick back, soak up the sun, sand and sea, and really not have a care in the world. 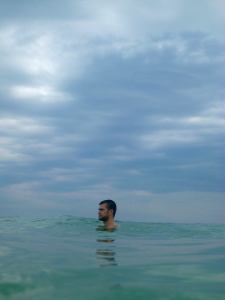 Tom in the ocean, taken with his waterproof camera. 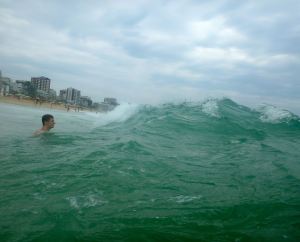 And there’s me, diving into the surf. 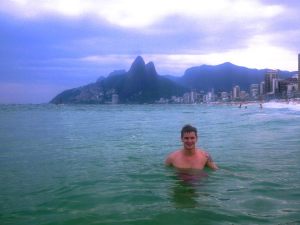 Swimming at Ipanema with the scenery behind me. 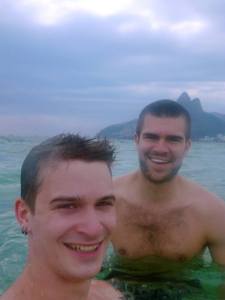 And of course, the experience wouldn’t be complete without a selfie. 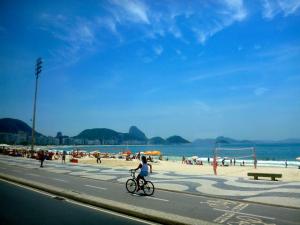 When the sun comes out, Rio de Janerio really does become, in my opinion, one of the most beautiful cities I’ve ever visited.