After another full day of travelling from Groningen, with brief changeovers in Leer and Hannover, I finally arrived in Berlin. It wasn’t without a delay of over an hour – central and eastern Germany had recently experienced a bit of flooding, which had caused lots of problems for the trains – but not even that could quell my excitement. “Spend at least a week in Berlin”, my friend Dane had told me on one of my last nights in Sydney. “We had a very tight schedule when we went. We were only there for a few days, and it was definitely not enough.” He’d let out a sigh and stared past me reminiscently, eyes glazed over with memories. “You’re gonna have such an amazing time. And the men! They’re going to eat you up, Robert.” Dane was just one of many of my friends who had expressed such sentiments about Berlin, so I was brimming with anticipation as I stepped onto the platform at Berlin Hauptbahnhof.

I was picked up at the main station by Donatella, an old family friend from Australia who, apart from a brief reunion in Sydney back in January, I hadn’t seen in at least ten years. We’d got on rather well at our most recent meeting though, and I was excited to meet up with her again here in Berlin, where she now lived. “You should stay with Donatella when you’re in Berlin,” her father had told me last year when I was telling him of my travel plans. “She’s queen of the clubs over there, she’ll look out for you and make sure you see everything you want to see.” I’d taken it easy during my week in Groningen, partly in anticipation of a crazy weekend with Donatella. And I was in no way disappointed – though I don’t think there was anything that could have prepared me for what Berlin was about to throw at me…

I threw my bags into the car as I greeted Donatella, and was briefly introduced to her friend and housemate Simon, who was driving, and then headed back to the apartment. It was an old style building with large towering walls, and huge rooms that seemed too big for their inhabitants, given that half the rooms only seemed half full with furnishings. “I think there’s like… five people who live here? Maybe six? I don’t know, anyway, here’s your bed.” Donatella had warned me that I wouldn’t have a room to myself – which, after all the hostels and train cabins, I assured her was no problem – so I was introduced to Eva, a Kiwi girl who had been living in Melbourne for a few years and had now just relocated to Berlin, who I was sharing a room with. “Everyone else will be back later after work, except some of the boys who are away for the weekend.” Donatella was a little quirky but very laid back – I’d only been in the city for a matter of hours but I could tell why she enjoyed living in Berlin.

Before I’d arrived in Berlin, Donatella had also issued me a slight warning. “Just so you know… Things can sometimes get a little crazy around here. Like, not all the time and not that often, but there’s always the all-nights and crazy benders where people are up for three days straight. But only ever on weekends – everyone still has jobs, so you know… It’s slightly normal.” Bring it on, was all I had to say. I was no stranger to partying, and if even Donatella was telling me that it was crazy, I could be sure it was a force to be reckoned with.

After settling in and having something to eat, I was introduced to more people as they arrived at the house. Firstly there was Ruth. “Ruth is an original Berliner – born and raised,” Donatella had informed me. “You don’t find too many of them still living here anymore.” Berlin was a city with a very cosmopolitan vibe, thanks to the artists and creative types that came from all over the country, as well as all over the globe, to be a part of what was becoming one of the big places to be within Europe. Ruth worked as a burlesque dancer – of course she did, this was Berlin – and it was during my conversation with her that I discovered why I’d had such trouble trying to find a place to stay in Hamburg the previous weekend. “Yeah, there was a big biker convention. All the leather men were there, Reeperbahn would have been very busy,” she had said. “It’s a shame you didn’t get to see Hamburg, it’s a really fun city,” though after that she shrugged her shoulders. “But hey, you’re in Berlin now,” Ruth said with a smile. It was that very logic that had drawn me straight here rather than attempting another stopover in Hamburg – I’d heard the stories and I just couldn’t wait any longer to discover them for myself.

The last person I met at the apartment that evening was actually an ex-housemate, a woman named Lola. She was also a burlesque dancer – never mind that she was older than my mother though, because she looked amazing! She arrived looking like a pin up girl who had just stepped out of a sailors shoulder tattoo, complete with her waist cinched into a corset. “You said you worked in a fetish store, right?” Donatella asked me. “Lola will be able to tell you all the places like that around here.” And she was delighted to – she rattled off the named of retailers, bars and saunas faster than I could have ever hoped to remember them after a few vodka tonics, though in retrospect I think I checked most of the boxes she listed during my time in Berlin.

Eva had already headed out to meet some other friends, and Donatella had taken leave of our company for a short while – to study, or nap, or something, I’m not sure – so I was left to converse with these three crazy Berlin personalities I had just met. “So where else have you been? What are your travel plans?” Simon asked me as he ashed a cigarette into the tray on the table. I retraced my travel steps, right back to Singapore, and then outlined the rest of my intended itinerary – the plan was to continue further into Eastern Europe: Czech Republic, Slovakia and Hungary. “Yes, you have to go to Budapest!” Simon had exclaimed. “I’ve got a friend who lives there. She is crazy, I swear will get you wasted every night! But definitely let me know when you’re going so I can set you up.” I was excited to already be making connections.
“And how long are you staying in Berlin?” Ruth had asked, almost ominously. He question hung in the air while I had to consider my answer – after all, Dane had told me at least a week.
“Well… I’m not sure yet. I don’t have any set plans, so it’s flexible… I’m thinking at least a week.”
All three of them shared a rather knowing laugh, and Lola reached over to put a hand on my knee and looked at me with a grin. “Oh darling, that’s what they all say. You’re never going to leave.”

When it came to the weekend, there really had been no exaggeration – it was wild. At close to midnight I headed out with Simon and Donatella to a bar and club called Prince Charles. Donatella knew someone, so we didn’t wait in line. Once we were in, the night progressed into a blur of drinks and people and music and making friends in bathrooms, the memory of which only exists through photographs. Eventually the sun began to rise as I sat around the courtyard telling straight men how attractive I thought they were – and then getting overly excited at the simple fact that they didn’t care, and were completely indifferent to my homosexuality. “That’s so Berlin!” I remember telling one of them. “If I was pulling this shit in Sydney I’d probably be dying in a gutter somewhere.” 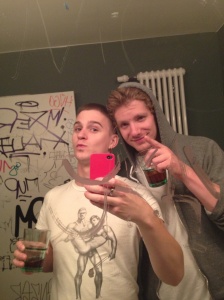 Eventually Donatella rounded me up and we headed home – with at least 6 other people from the club who I’m not sure anyone had even known before that night. I’d heard of the after party culture in New York, but I figured that anything was possible in Berlin. Because of the early sunrise, it was actually quite bright and well into the morning by the time we fell out of the taxis outside Donatella’s building. I might have had a few more drinks, I don’t remember. The only clear recollection I have is sitting on the floor of the bathroom with some guy I’d never met, trying to have some deep conversation while he asked me to explain all of my tattoos. At that moment, whatever buzz I was feeling died. I looked around the bathroom with… well, not sober eyes. But you know what I mean. “Ugh,” I groaned as I pulled myself off the floor. “Sorry dude, but I didn’t even know you. And I live here, so I’m going to bed.” I stumbled out of the bathroom, into mine and Eva’s room – she was no where to be seen – and crashed on my mattress on the floor.

I woke up at noon. My new friend from the bathroom was lying comfortably on the kitchen floor. Half the people who’d come back from the club with us were gone. They’d been replaced by people who I didn’t recognise, who seemed to be only meeting the permanent occupants of the house for the first time too. I have no idea where they came from, but I just rolled with it. There was a boy and girl, around my age, and I spoke to them for a while.
“You mean you’re not drunk anymore?” the guy had said when I’d recounted my night to him. “How the hell are you still dealing with us right now.” I honestly wasn’t sure if I was dealing with them, but for someone who’d been awake for 36 hours this guy was actually able to hold together a coherent conversation.
“How do you do it?” I’d asked.
“Do what?”
“These benders! People stay awake for, what, three days straight?”
“Oh,” he laughed. “Drugs.” I guess it was obvious, but I hadn’t expected him to put it so simply. We spoke a lot more though, and while I can’t recall his name or anything else about him, he seemed like an alright guy. Like Ruth, he was a born and raised Berliner – it was like discovering an endangered species.

“Berlin needs more people like you, man. Your travels, man, you’ve seen the world! You know what it’s about, what makes Berlin such a great and crazy place. Right now it’s filling up with too many just… Germans!” I laughed at that. “No, but seriously. You should stay in Berlin! It’s an international city, full of people like you from all over the world! Berlin needs you.” At the time, his words seemed like cute drunken ramblings, but by the end of my time in Berlin they would feel like a foreshadowing, the beginnings of a very persuasive argument this city was going to lay on me.