The first day of the rest of my adventure started with a hangover, of course. After dinner our tour group had hung around in the common room for a little while, exchanging emails and contact details and saying some final goodbyes, but most people had early transport booked for the morning and wanted to get a good night sleep. I, on the other hand, had absolutely no plans. So while the rest of my companions trailed off to bed, I found myself in the kitchen, where some of the other hostel guests – and few of the staff – were all drinking champagne and vodka, and celebrating the city’s birthday. I was welcomed into the fold with drunken, open arms, and while I don’t really recall any of their names, they were a lovely bunch of people. Then again, anyone who is handing out free champagne and vodka is a lovely person in my book.

So after everyone had left in the morning, I found myself sitting on my bed wondering what to do with the rest of my time in St Petersburg. The only person left was Don, who was also staying here for a few more days, but he had risen early to head to the Hermitage. I wandered out into the kitchen and bumped into Maria. She had ended up staying longer after having an accident on her first night here – her and Don had gone to see the a Russian ballet, and afterwards she had slipped on one of the wet steps outside the theatre and hit her head, giving her a concussion. She’d gone to the hospital and in the end everything was alright, but she had decided to stay stick around for a little longer and take some time to fully recover.

Over breakfast, I had a chat with her and another Australian girl named Beck, who was staying at the hostel too. Maria was meeting up with one of her friends that afternoon, and was going to be driving out to a place called Peterhof. I’d never heard of the place, let alone what was out there, so Maria explained that it was the site of an old Russian palace, and was actually in the next town over from St Petersburg near the Baltic Sea, and the grounds were full of beautiful fountains. When I confessed I had no plans for the day, Maria said that her friend would have room in her car if I wanted to join them. I’d grown to really like Maria – she came off as a little quirky, probably because she had more of a sense of humour than most Russians I’d met, but I kind of enjoyed that. She also loved to travel, so I always found we had a few common interests to chat about. Vlad had seemed like a nice guy, and had been a huge help in getting everyone to their transport out of St Petersburg, but despite all his efficiency I never really got to talk to him very much or get to know him like I had with Kostya, Oko or Snow.

So that afternoon Maria and I met with her friend Natalia, and we set off to the palace at Peterhof. The two women hadn’t seen each other in years since they’d met while holidaying in Thailand, so I let them catch up and chatter away in Russian while I sat in the back, alternating between catching up on my blog and sleeping off more of my hangover. It took about two hours to get there, so when we arrived I was actually feeling quite refreshed. We spent the afternoon walking around the garden and admiring the fountains. Natalia didn’t speak very much English, so Maria played translator as she explained some of the fountains and the buildings in the grounds. It was a nice and relaxing afternoon, and for the first time there wasn’t a real itinerary we had to follow, or a group to consult. 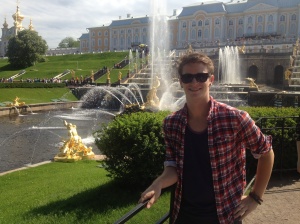 In front of the main fountain in the Peterhof Palace grounds. 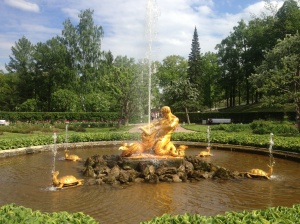 The impressive and slightly homoerotic fountain – the Russians sure love their gold.

Standing next to the Baltic Sea – of the Gulf of Finland, depending on who you ask, apparently.

Another of the fountains in the grounds. 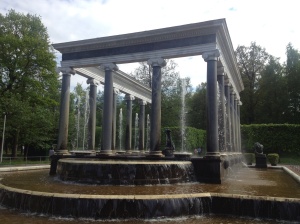 More fountains – I didn’t take note of any of their names, but they were all very beautiful.

It was a beautiful afternoon in an even more beautiful place.

After we left the gardens, Maria said that Natalia had invited us to her home for dinner. I didn’t have plans of my own, so I accepted the offer and headed back to St Petersburg with them. At Natalia’s flat I was introduced to her son, a boy of fifteen named Arseny, who looked deceptively older than he was, much like the boys from Blue Oyster. He was learning English at school, and after chatting for a little while Maria suggested that maybe Arseny could show me around St Petersburg the next day. It was an opportunity for him to practice his English by hanging out with me, and I was always keen to be shown around cities by the locals who lived there. So we had dinner together – I chuckled to myself and thought of Marti when I noticed lots of dill in the meal – and made plans for Arseny to meet me at my hostel in the city the following day.

But before I left, Natalia had enquired as to how old I was. When I told her I was twenty one, there was a look of excitement in her eyes, and she went over to the fridge to pull out a bottle of clear liquid. Maria translated and explained that it was some kind of local, homemade alcoholic spirit, and poured me a shot of it. I downed it in a gulp – it tasted like vodka except much stronger. My face must have given me away, because Natalia gave a small giggle and said “Forty-five.”
“She means this alcohol is forty-five percent,” Maria explained with a smile. “Very strong.”
Indeed it was – I was beginning to learn that the Russians give us Australians a hard run for our money when it comes to drinking.

So I spent the next day sightseeing in St Petersburg, under the guidance of Arseny. We planned to start late – I had (correctly) preempted another boozy night and a consequential painful vodka hangover – but it was a gorgeous and sunny afternoon as we set off up Nevsky Prospekt. We walked along the street, and Arseny explained bits and pieces of history about the area and the city, to an extent that I found quite impressive for a fifteen-year-old boy. I don’t think that, at his age, I would have been able to take a tourist around Sydney and take them to all the popular tourist spots and explain the history behind them, as well as the city in general. We passed the four horsemen on the Anichkov Bridge that crosses over one of the canals, and walked through the city to St Isaacs Cathedral. There was a viewing platform around the domed roof of the church, providing a 360 degree panoramic views of the city, so Arseny and I climbed up the 200 odds steps in the stone spiral staircase to reach the top. From there he pointed out some of the other recognisable features in the city, but then he blurted out, “The view of St Petersburg from the air is not really as nice. I think maybe it is better seen from the street, or by boat.” I was a little taken aback by the brutal honesty – and wondered why he’d waited until after we’d climbed to the top to tell me this – but looking around, I could really see what he meant. There was no iconic cityscape like you might find in London or Paris, and there wasn’t the concrete jungle of skyscrapers that made places like Bangkok slightly enchanting in their own futuristic way when seen from above. From the top of the cathedral, St Petersburg looked like a jumble of buildings with the occasional landmark emerging from the seeming monotony. It really takes a stroll through the streets to truly admire the magical beauty of St Petersburg, and a few times I found myself wandering through the alleys during the perpetual dusk, admiring the older buildings and classic architecture in the smaller streets.

The very stop of the stairs in the cathedral. 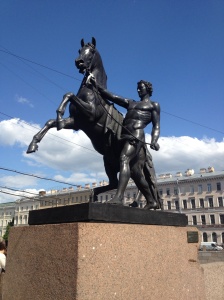 One of the four horsemen on the bridge.

The park Arseny and I walked through on our way home.

Arseny suggested going on a boat tour, but I had to confess that I’d already passed up the chance to do it once, and that I was so hungover I’d probably fall asleep if I sat on a boat for an hour. Instead we just decided to wander back to the hostel and stop at a small café for some lunch along the way, as well as passing the Church on the Blood of the Spilled Saviour so that I could get a picture. It was a beautiful sunny day, unlike the day that we had first arrived in St Petersburg, but ever since then we had been enjoying this glorious sunshine. There’s something about summer here in the northern hemisphere that just gets people very excited. Their winters are longer and colder, so when the warm weather hits they come out of some kind of hibernation and start to actually enjoy life again. We passed through a park on our way home, where I saw an efficient procession of workers all fixing up a stone and metal fence. “It happens every summer,” Arseny told me me. “Everything gets old and worn in the winter, so every summer things are restored, and improved.” Australian’s really do love their summers, with the beaches and the barbecues and the sun-tanned skin, but for the first time I began to think that while we love them, we don’t really appreciate them for what they are. And I could feel that from just seeing the European summer – stay for the winter, and I don’t think I would ever take the Australian sunshine for granted again.

I was glad that I’d decided to stay a few extra days in St Petersburg before heading off for the rest of my Eurotrip. I saw some nice sights, but it was also good for me to ease back into solo travelling while still having people like Maria around to give me some ideas and create a bit of direction. Moreover, I was also a little surprised at, but definitely grateful for, how nice some people can be to other people they’ve never even met, particularly travellers. It would be easy to write myself off as a jaded cynic after everything that happened with Charlie in Beijing, but my days in St Petersburg had restored a little bit of my faith in the kindness of strangers. Maria invited me along to Peterhof so I could see a part of Russia I otherwise never would have, Natalia invited me into her home and even cooked me a meal, and Arseny took almost an entire day out of his schedule to show me around the city and play personal tour guide. With the exception of a little practice speaking English with Arseny, each of them expected nothing in return. They were just a genuine bunch of lovely people who wanted me to feel welcome in Russia.

And they did. I boarded my train to Finland the following afternoon satisfied that I had seen some beautiful parts of Russia, pleased that I’d met and befriended some lovely people, and with a little more confidence in my abilities to continue this journey on my own. Though truth be told, I don’t think I’ll ever be alone. The world is full of these kind strangers, and sometimes a stranger is just a friend you haven’t met yet.