The Alamo is potentially the most well-known tourist attraction in San Antonio due to its place in American history, but just outside of town there are a series of other old churches known as the San Antonio Missions. We had intended to ride our bikes out there on Friday afternoon, but after the Thursday night we’d had, Hector, Nico and I decided we were in no condition to make that journey. On Saturday both Hector and Jay didn’t have to work, so I spent the day hanging out with them. I joined them around town while they ran a few odd errands, but then it was off to see the Missions.

Although there was one stop on the way out there: an open air market, full of all kinds of trinkets, gadgets, and other things for sale, most of it second hand. We pottered around there for a little while, though I didn’t end up finding anything noteworthy or anything I wanted to buy. The highlight was probably the market’s sign: 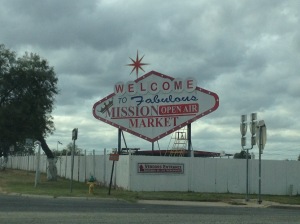 After that it was on to the San Antonio Missions National Historical Park. There are four old missions that are found downstream along the San Antonio River, although the furthest one is where the visitors centre was located, so we headed down to the Mission Espada.

We went into the visitors centre and gift shop and had quick look around. There was a small cinema that was showing some historical videos, but I have to admit that after the past few nights of partying that I’d had, staying awake in such a dark environment proved difficult, and Hector caught me dozing off a couple of times before we’d made it to the end of the presentation. After that we headed to the next closest church, Mission San José, which was larger slightly more impressive than Mission Espada.

The missions had all been Catholic outposts that aided the spread of Christianity across the Southwest during the 17th, 18th and 19th Centuries, but now they were mostly just historical buildings, heritage listed to as to keep them preserved in their current conditions. There was a room that had been redone as a church inside Mission San José though, but I much preferred just wandering through the open grounds and exploring the secret nooks and long abandoned rooms within the old building.

The modern side of the missions. 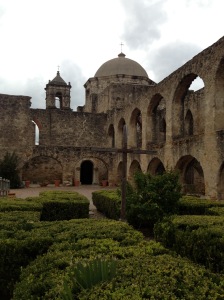 In the grounds of Mission San José.

It was great that I’d had Hector and Jay to take me out to the missions and show me around – my last minute planning and decisions to end up in San Antonio meant that I didn’t really know a great deal about it and hadn’t done much research, and while I’m sure if I’d ended up there without them, every man and his dog would have suggested I go and see them, having a personal guide to the city never hurts.

We made our way back into town later that afternoon, and after stopping for snow cones and Tex Mex (Mexican food with Texan influences – although to be honest it’s pretty much the same as what we’d call Mexican food in Australia, which did make me curious as to what real Mexcian food would actually be like), we picked up some supplies for the evening. Hector and Jay had been organising to throw a party at their house that night – I’m not sure if it was a special occasion or not, thrown in my honour, because from what I had seen so far they didn’t seem like the kind of guys that needed an excuse to throw a party.

They really went all out. Between food and drinks and their hilarious friends, I couldn’t have imagined a better way to spend my last night in the city. I spent the beginning of the even playing token Australian abroad, answering all the usual questions about my mysterious homeland, then pronouncing a bunch of different things, and including names, so they could hear my accent, as well as explaining the different terms we used for different things back home. It’s kind of weird the things you take for granted about the way you… simply exist, I guess? And you never realise it until you meet someone who’s never met anyone like you.

After eating and drinking came, inevitably, dancing. Apparently Jay used to do drag, so out came a wig and pair of heels too, although no one could really pull off a successful dance move in the heels (but that didn’t stop us from trying). There was lots of laughing and dancing, although one thing that happened that I found rather peculiar, upon later reflection, was the numerous times that I was referred to by some of the guys as “white boy”. I mean, it wasn’t really shocking – I am white, after all – and I wasn’t offended, because… well, I’m white? Most of the people at the party seemed to identify as Hispanic on some level, and I realised that I’d never found myself in a social situation or a group of friends where white or Caucasian wasn’t the most represented racial category. It didn’t bother me at all – it was just funny to be the token white boy for once, instead of the token gay guy.

One photo that pretty much sums up my weekend in San Antonio – beer, pickles, and the chilli flakes that Nico used to spice up the Dos Equis on my first night.

A solid effort and a great night.

Sunday was my last day in San Antonio, but my bus wasn’t due to leave until the evening, which gave Hector and Jay plenty of time to show me the Riverwalk, the remaining attraction of San Antonio that I had yet to see. Though not before bringing me a refreshing cocktail in the late hours of the morning, while I was printing my bus tickets off Hectors computer.
“Sunday Funday,” he said with a grin. It was savoury, but there was no pickle in it, so I drank it without issue.

If it was late enough in the morning to warrant drinking, then it was probably late enough for lunch, so the first port of call was Quarry Hofbrau, which despite the name, did not actually serve German food. However, they did make some delicious Tex Mex, but the real reason Hector wanted to bring me there was so that I could try their Dos-a-ritas. That is, a frozen margarita garnished with a full bottle of Dos Equis beer. There was a range of different flavours that could be topped off with different beers, but I’d a fan of the classic margarita and I’d been enjoying Dos Equis for most of the weekend, so I stuck to the original Dos-a-rita. Don’t ask me to explain the physics of it, but the frozen margarita keeps most of the beer still inside the bottle, which slowly drains out when you lift the bottle up. So you can let it all pour out at once, or keep topping up the glass with more beer as you keep drinking it. If it hadn’t only been midday, I probably would have ordered another!

However, after leaving Quarry Hofbrau, Hector and Jay did take me to something else – a drive-thru bar. I don’t mean like the bottle shops in Australia where you can drive through, throw a case of beer in the back of your car, pay and keep going – this place had a menu! They did cocktails! Of course, they’re not allowed to serve “open” alcohol to the cars, so each drink was just sealed in a plastic bag before handing it over. I was part impressed, part amazed, and part terrified as to how this was actually legal. But it was, so of course I ordered another cocktail to go.

After all that, we finally headed down to the Riverwalk. The whole concept is really interesting – given that it’s such a popular attraction, the San Antonio Riverwalk is almost like a main city centre that is focused around the winding stretch of water. I know that cities build on or around water isn’t exactly unique – I’d been to a few examples myself – but it was still a cool vibe. There were shops and restaurants along the waters edge for miles in either direction. When you walked down any of the staircases that take you to the waters edge, it feels like you’re leaving the upper streets of the city behind and entering some secret, magical world, full of people yet free from traffic, except for the occasional tour guide boat chugging past, wide-eyed tourists taking in the scenery.

Boat tours went up and down the river.

We spent the afternoon relaxing and wandering down the Riverwalk, hanging out and chatting and remembering all the fun we’d had over the weekend. Hector kept asking if I wanted my picture taken with anything – after travelling by myself for so long, I sometimes forget that that’s what people did when they visited foreign cities. I had just resigned to mostly not appearing in my own photos (or taking selfies, of course), so once again it was nice to have someone to take the pictures for me.

Outdoor amphitheatre along the edge of the river. 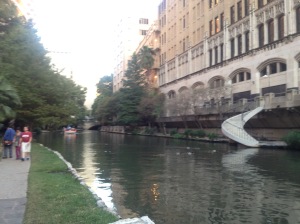 After walking a decent length of the cool, shady Riverwalk, we went back to the actual city centre, where we had been on Friday night. I glimpsed the Alamo again, and Hector took me to see another popular attraction, the San Fernando Cathedral. The inside was beautiful when we had a quick peek inside, but given that it was Sunday afternoon and there was a service beginning, as tourists we weren’t allowed to hang around for long.

San Fernando Cathedral, the oldest cathedral in the nation.

And then the sun was setting, all too soon, and it was time to head back and pick up my bags and make my way towards the bus station. Nico and Daniel met us there, and I said my heartfelt goodbyes to the guys who had welcomed me into their lives for the weekend, and truly made my San Antonio experience an amazing one.
“I don’t think we could have asked for a better first Couchsurfer,” Hector said with a smile. “Although I wonder if we’re ever get anyone as awesome as you!” I was so glad to have had a positive experience too, both for me and them. Bad first experiences can really put people off for life, but a good one allows for them to keep a little hope if ever the future ones don’t turn out so well.

I loaded up on snacks, stored my bag in the luggage compartment, and made my way onto the bus. I had been catching the cheaper MegaBus buses up until now, which cut on costs by not actually having an official bus depot, but now I was kicking off on some long haul journeys that MegaBus didn’t cover, so I was boarding the first in a series of Greyhound buses that would be taking me across the Southwest. First up was the long drive across the vast empty expanse that was the rest of Texas. I waved to the guys one final time before the bus pulled out of the depot and chugged away into the night.