The sky was bleak and overcast as we disembarked from our 36 hour journey and found ourselves on the platform at Ulaanbaatar train station. Most of us were still dressed in our pajamas and our comfortable clothes from the train, so the lack of sunshine was particularly chilling. “Spot the people from the Southern Hemisphere”, Tim joked as we stood around shivering, waiting for our tour guide to make themselves known. It didn’t take long before we found Oko, a stylish looking Mongol woman who did a quick head count before ushering us out of the station and into the car park. As we climbed onto the minibus that would take us to our hotel, Oko started the round of introductions, and it was refreshing to hear her voice ring through the entire vehicle. Snow’s rather timid nature meant that anyone sitting at the back of the bus generally had absolutely no idea what she was saying, as she was just so soft-spoken. We arrived at the hotel and all rushed upstairs to take our much needed showers. I was sharing a room with Tim, and I let him shower first. “Just a warning,” he said as he emerged from the bathroom, “the hot and cold water symbols on the tap are the wrong way around, and it took probably that whole five minutes for the water to get slightly lukewarm.” He looked refreshed, to say the least. However, I was lucky enough to find that Tim had been heating the water up for me, and consequentially enjoyed a nice hot shower. So much that when I decided to get dressed, I thought shorts might be a suitable choice. I looked out the window to discover the sun had come out, so anticipated it might get a little warmer. On the way down the hotel stairs, I ran into Tracy, one of the Australian women. “Oko just told us its gonna get to about two degrees,” she warned me, while doubtfully eyeing my attire. “Ah.” I turned on the spot and marched straight back up the stairs to change into my jeans.

Despite opting for the warmer clothes, it was still an absolutely freezing afternoon in Ulaanbaatar, yet we still trekked it out to do a little bit of sightseeing. Even Lonely Planet books describe it as an “ugly cityscape”, and I don’t feel as though I’m one to challenge that description. There are a few cool looking skyscrapers, but on the whole it’s a fairly dull and plain looking city. We trudged through the windy streets until we reached Sukhbaatar Square, probably one of the few pleasant looking places in the city. It was the main city square, and despite it being dark and gloomy, the space was full of children riding bikes and roller skates, as well as family groups and other pedestrians. However, because it was an open square the wind chill was absolutely horrendous, and there more jokes about the obvious Australians in our group. I myself could not stand still, overcome with involuntary shivers and shudders, cursing the fact I’d left my thermal shirt back at the hotel. 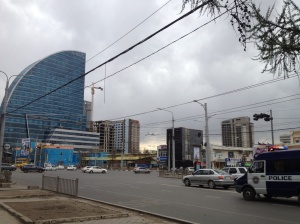 The “ugly cityscape” of Ulaanabaatar. 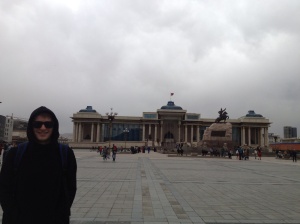 In Sukhbaatar Square, with the Mongolian Parliament House in the background.

Statue of Chinggis Khan in front of Parliament House.

Statue of a horseback archer the Mongolian Empire was infamous for – this sculpture also depicts Chinggis Khan’s son.

We crossed Sukhbaatar Square to the Mongolian Parliament House, the outside of which is adorned with statues of Genghis Khan, the famous Mongolian leader, and his sons and grandsons. It was interesting to learn that his Mongolian name is actually Chinggis Khan, and that the English translation that the Western world is more familiar with is completely non-existent in Mongolia. We went through a short tour of the small building, but there wasn’t a great deal to do or see, other than a few small facts about the history of Mongolia that Oko shared with us. After that we got in some taxis and went to a nearby monument called Zaisan Monument. It was a structure that, like many buildings and cities in this country, was built for the the Mongolians by the Russians. We had to climb up quite a few stairs to get to the top, which was rather unpleasant in the wind, but despite being quite a dull city the vantage point provided a good view of Mongolia’a capital city.

View of Ulaanbaatar from Zaisan Monument.

Standing with the actual monument.

Detailed mural that ran around the main platform of the monument.

At the base of the stairs to the monument was a man with a huge trained eagle perched next to him. I was reminded of the leader of the Huns from the Disney movie Mulan – it seemed that the reliving the films from my childhood wouldn’t end in China. For a small fee you could wear the heavy protective glove and hold the eagle on your hand. I was captivated by the powerful bird of prey, and wanted to give it a try. The eagle was remarkably heavy – it took most of my strength just to hold it up. The birds owners began waving his hands up and down and saying something to me in Mongolian. Oko translated: “He is saying to move your arms up and down, to make bird fly.” Using the remaining strength in my arm, I dropped it down and raised it back up as best I could under the weight of the eagle. It’s wings flew out to catch the air, and it flapped them a few times, as though it was about to take flight at any second. Luckily it was well trained, so it didn’t, and I handed back the eagle and removed the glove. My forearm still felt sore from the grip of its talons – I couldn’t imagine how painful it would be to feel those claws on unprotected skin.

The last attraction we saw that evening was a performance of traditional Mongolian music and dancing. I was unable to take any pictures, but many of the dancers wore elaborate costumes, though it was the music in the show that I enjoyed the most. The Mongolian folk music was created from an orchestra of drums, horns, and what appeared to be their cultures versions of string instruments such as harps, violins and cellos. The songs were actually quite beautiful, but the most remarkable and culturally diverse part of the performance was the singers. Throat singing, where vocalists are able to create and sing two notes at the same time, and quite literally play their throats like instruments, is a common feature in traditional Mongolian music. I wouldn’t exactly say that the sound was beautiful… but it was definitely interesting. After the show came dinner, which I was extremely excited for. Let’s just say I have an enthusiasm for meat, and Mongolia would be a difficult, or at the very least boring, place to be a vegetarian. We sampled the local draft beer, named after the one and only Chinggis, and I probably ate my weight in different traditional Mongolians foods. I didn’t try the horse meat though – it wasn’t offered in very many dishes, so I figured it must be quite a delicacy.

When we ordered a draught beer, the waiter asked “Big Chinggis?” We nodded enthusiastically.

As we were walking home it began to snow a little bit. It was exciting for the first few moments, as we saw the white flecks flutter down to land on our clothes – then it sunk in just how absolutely freezing it was. We scurried back to the hotel to warm ourselves up. Once Tim and I were up in our room, I cracked open the Chinese ‘good health’ alcohol – that became its official name, since the entire label was in indecipherable Chinese characters – and mixed it up with with some Coke. “I think it might be a kind of whiskey, maybe?” I said as I took a few tentative sips. It had an herbal aroma to it. “Kind of like the Vietnamese make Mekong whiskey?” I took a swig from the bottle to get the full force of the flavour. I must have made a face, because Tim laughed and asked for a taste. He sniffed the bottle at first, and scrunched up his face as the aroma filled his nostrils. “Wow, okay…” He poured a small amount into cup and threw it back. After a moment of contemplation, he said “It almost tastes a bit like echinacea, doesn’t it?” I had to laugh – he was right, but the taste was growing on me. Tim and I sat up a bit later into the night, chatting about travelling and our lives back home. During a few group conversations back in China, we’d both casually revealed that we were gay, although this was one of the first times we had really gotten to talk one on one. It hadn’t really occurred to me before now, but now I was thankful that I wasn’t the only token gay person on the tour. We talked about our travels, about turning Grindr on in foreign cities, and I shared some fears and concerns about the official Russian stance on homosexuality. We even talked about home in Australia – Tim was from Melbourne – and discovered we had a few mutual friends, as is the small world that is the gay scene. After initially holding myself back a little bit for the beginning of the tour, it felt good to open up a little more and really be myself during the whole ‘getting to know you’ process, something that would only get easier from here on in.