After a couple of nights and days spent with locals, and keeping the touristic activities to a minimum, I thought it best to start seeing at least some of the real touristic attractions London had to offer. I was going to be around for a couple of weeks, so I definitely had the time, and London really did have a lot to offer in the way of sights and attractions. It had been a while since I had been to any museums – I’d almost been avoiding them ever since my visit to the Vatican – but from what I had gathered there were definitely a few in London that were definitely worth taking a look. Many of them were also free, which was almost always a big deciding factor as to whether I would bother visiting something that I was only half sure I might really enjoy. But growing up I had always been a massive dinosaur nerd, so there was no way that I could pass up the opportunity to see the Natural History Museum and its collection of fossilised skeletons. What I had failed to anticipate, however, was that such attractions are also really popular among children, and what I had failed to learn before I arrived at the museum was that it was currently school holidays. Yes, the line to get into the museum that morning was probably twice as long as the diplodocus skeleton that I knew was waiting for me inside the main hall of the Natural History Museum, just out of sight. It snaked around the various courtyards and around the edge of the outside park like a fat snake that had eaten a bunch of screaming, squirming and misbehaving children. And there I was, stuck in the middle of it.

Outside the Natural History Museum.

Thankfully I had my book to keep me entertained, because the wait was easily over an hour, possibly getting very close to two. I stopped looking at my watch after a while because it was simply too frustrating. Even my training as a sociologist and my love for participant observation and people watching failed to ease the painful wait – there’s only so many dumb things children say or do, or family arguments you can eavesdrop in before it all just becomes a monotonous blur. Several times I considered bailing and coming back when the line was shorter, but then I had no idea if the line would ever be shorter, and I’d come this far already that I was determined to hang in there. It felt like a bit of a surreal dream when I finally reached the front of the line, but when I did there was a quick security search before I was ushered in through the front doors and into the main hall of the museum.

Where I was greeted by another line. I nearly screamed, until I realised it was just a line to get into one of the attraction rooms. Of course, it was the main dinosaur room, but I decided I would come back to tackle that one later – I’d had quite enough of lining up for the time being. So I wandered through the halls of the museum, looking at exhibits and learning about all sorts of natural phenomena. I surprised myself with realising how much I actually already knew about a lot of stuff… then was probably less surprised when I remember that a lot of the stuff in the museum was aimed for children. There were halls and halls of taxidermy animals – or authentic looking replicas, I’m not 100% sure – which were also interesting to look through, as well as a bunch of fossilised of creatures which I guess weren’t cool enough, or born in the wrong era or whatever, to be included into the real dinosaur exhibit. Though considering there was no line to see these ones, I wasn’t complaining. 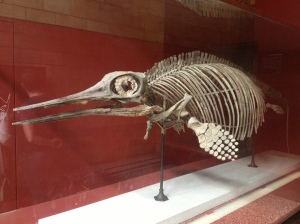 An ichthyosaur skeleton in the Natural History Museum. 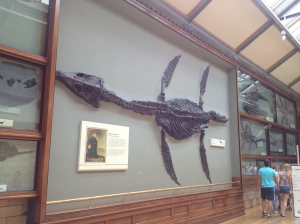 The museum has extensive collections of birds, reptiles and insects, as well as scores of invertebrates, but it was the rooms dedicated to the mammals that definitely had the most to offer. They had models of species great and small from all over the continents of the world, as well as the worlds oceans. Suspended from the ceiling was basically every type of whale or marine mammal under the sun, hanging motionless in the cavernous walls of the museum. 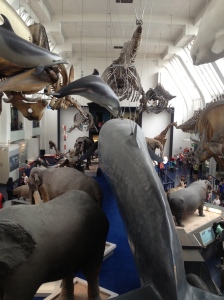 The mammal room is packed full of life size replicas of modern mammals. 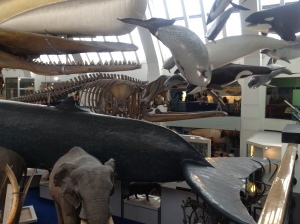 The biggest of the mammals are the whales, the biggest of which is the blue whale. However, it was virtually impossible for me to capture the whole model in a single photograph.

But after I’d exhausted just about every other possibility, it was time to head to the dinosaurs. The line to get into the exhibit room was shorter than it had been earlier in the morning, but there was still a line. The room itself was littered with information and interactive activities and games, which I took way too much pride in beating all the little children at, but there was still a long line that passed over the whole exhibit on a suspended bridge. It seems you couldn’t get down to the rest of the exhibit until you’d lined up to see a special surprise of some sort. The line was long but it shuffled along at a moderate pace. As I waited, I passed by a vast collection of fossilised skeletons, and I stopped to take photos of my favourite ones and the best ones, reliving my nerdy childhood and my love for Jurassic Park.

Skulls of a triceratops and an allosaurus.

Finally I was at the front of the line, and I got to see what we had all been waiting for. Around the corner in a dimly lit room, we discovered a tyrannosaurus rex. Not a fossilised, inanimate skeleton, but a fully fleshed and very active dinosaur. Well, it wasn’t flesh, but it was a very lifelike robotic model, sniffing and stomping and moving about, opening its jaws to let out screams. It was pretty cool, but I found myself thinking that overall it was rather gimmicky. As I child I probably would have loved it, and I suppose it is there to either frighten or impress the younger children, but I realised that I’d been more interested in looking at the actual fossilised bones of real dinosaurs. It was also at that point that I realised I had never stopped being a dinosaur nerd.

The tyrannosaurus rex moving, lifelike replica that we waited for so long to see.

After that I was beginning to feel a little bit of museum fatigue, so I headed outside to leave. To my horror, there was absolutely no line and there were people walking in and out freely. I made a point to remember that for my next museum visit, mornings probably weren’t the best time to visit, and from the Natural History Museum I strolled through the overcast streets of London all the way to Hyde Park, where I wandered through the paths and over to the nearby Wellington Arch for a photograph.

The Serpentine, the major lake of the park, stretching out across Hyde Park. 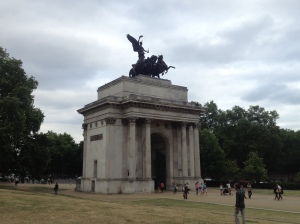 The Wellington Arch, the victory arch proclaiming defeat over Napoleon, was finished in 1827.

Following the idea that mornings weren’t the best time to visit museums if you wanted to avoid lines, I decided to make my way to the British Museum, another free museum that had a range of artefacts from all over the world, most notably the Rosetta Stone. I wandered throughout the museum, twisting and turning through the confusing maze of a floor plan, with no real direction or intense burning desire to see anything. It was an overcast afternoon that was threatening to rain, so it was really the perfect time to be inside in a museum. However, I suppose the reason that a lot of people choose to visit museums in the morning is that by the afternoon, many of us lack the concentration or patience to wander around looking at ancient relics for too long a period of time. I’m not exempt from this, and I probably spent a significantly shorter amount of time in the British Museum (although morning or afternoon – rain, hail or shine – I’m never one for spending hours upon hours at these kinds of places anyway). Still, I did enjoy my time there looking at the relics, from the beautiful to the interesting to the rather macabre. 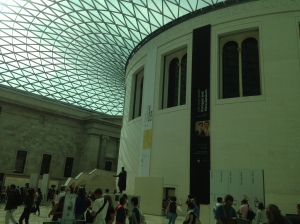 Inside the main entrance chamber of the British Museum.

Statue of Caesar that was being featured in the main hall of the British Museum.

An old clock adorned with sphinxes and a golden eagle.

Mummified cats inside the British Museum.

A perfectly preserved pair of skeletons on display in the museum.

The British Museum was the final stop of my day of museums. There’s only so much of that stuff I can take in a day, and considering all these places also involved a significant amount of travel between each one, I’d grown rather exhausted. I’d known that there was a lot to see and do in London, but it turns out that that was jut because London happened to be such a big place. I often misjudged what I thought to be walking distances and found myself on significantly hefty treks across the city. I’d get the hang of it eventually, but for now for the museums I was over and out.