The streets of Siem Reap were almost deserted – it could have been a ghost town if it weren’t for the few other tuk tuks and the occasional motorbike that puttered along on the road beside us. I rubbed the sleep from my eyes as dawn unfolded around the small Cambodian town – as I’ve mentioned before, early mornings and I make strange bedfellows, and I have no clear recollection of the last time I was getting out of bed at dawn. I peered through the thin light around us, and watched as the streets fell away to be replaced by dense woodlands and rainforest. I was on my way to the temples of Angkor Wat, to see what is regarded by many as one of the most beautiful sunrises in the world.

Yet my Angkor Wat experience had started the previous afternoon. After crawling off my overnight bus from Sihanoukville, I stumbled into a tuk tuk and asked to be taken to a cheap hostel. After being shown the dingy and humid dorm rooms, I caved in to the sales pitch of the hostel owners and checked into a private room – after the weekend I’d had, a comfortable bed, a private bathroom and a place to wash my underwear proved to be irresistible. Treat yourself, I told myself, and collapsed onto the bed to the catch up on the sleep that I had not managed to acquire during my overnight transit. I’d managed to strike an arrangement with my tuk tuk driver to be my guide through the major temples of Angkor Wat, so he told me he would come back this afternoon to take me up there to see the sunset. Unfortunately, he’d failed to mention that to be allowed inside any of the sacred buildings, you need to have the standard respectful clothing. In other words, attire that covers your shoulders and knees. I should have known better – it’s been the same with all the temples and palaces that I’ve visited throughout South East Asia. But my momentary lapse in judgement allowed me to rock up to the temple that is famous for its view of the sunset, only to be advised I wouldn’t be allowed to climb to the top due to the singlet I was wearing. I kicked myself for not realising this before I set out from the hotel, and then took a few photos of the view that I could see.

The ruin which has a beautiful view of the sunset, which I was not able to enter.

View of Angkor Wat from the base of the sunset ruins.

I was about to ask to go back to Siem Reap, but my tuk tuk driver said that I’d still be able to walk across the bridge that crossed the moat that surrounds the main Angkor Wat temple, all the way up to the main gate, so I decided to make the most of the sunset and check it out. The temple is really quite a fascinating structure, and it looked beautiful bathed in the light of the setting sun. I wandered up to see now far I would be allowed in. However, what I didn’t realise is that the temples technically close at five o’clock, and at this point it was almost six. Despite there being lots of people around, there were no guards or staff checking for tickets. As a result, my wandering found me quite deep inside some of the main chambers before I realised that I was well within the areas that required one to be ‘respectfully dressed’. But I’d come this far, and I couldn’t pass up the opportunity to take a few photos of the temple when it wasn’t completely flooded with tourists. I took a few photos of the mystical place, made a silent apology through prayer to anyone I may have offended, and quickly scampered out of the temple and back to my tuk tuk.

Angkor Wat in the light of the sunset.

Inside the main Angkor Wat temples.

One of the entrances into the main temple.

Flash forward to the next morning, and I am stepping out of the same tuk tuk in the same location, into a throng of people who are all making their way across the moat into Angkor Wat. Like cattle we plodded through the gates and into the inner compound, where there were already hundreds of people claiming their positions and setting up their cameras, keenly anticipating the rising sun. I found my own spot amongst the crowd and readied my camera for the moment the sun broke from behind the horizon and cast the temple into a silhouette. It was clear to see why the sunrise was such a popular event – the reflection in the pool within the grounds was simply stunning, and the temple took on an even greater air of majesty with sun burning brightly in the background. However, I couldn’t help but feel as though the experience was detracted somewhat by the extreme presence of tourism. It felt as though this structure, originally built as a famous and majestic Hindu palace, has been reduced to a holiday snap, a postcard, or simply just another checked box on a list of things to do in South East Asia. While I was still able to admire the view, the sense of mysticism and spirituality that I had while exploring the inner chambers yesterday had been successfully drained by the amount of photo taking going on around me.

Reflection of the sunrise on the Angkor Wat pool.

The throng of tourists crowding around the pool in anticipation.

Standing in one of the entrances to the inner chambers.

However, Angkor Wat is only one temple in what is actually a huge collection of relics and ruins scattered throughout a huge area. The entrance into the domain of these temples is about four kilometres from the town of Siem Reap, and once you pass the main temple you reach Angkor Thom, four times the size of Angkor Wat and not so much a temple as it is an ancient enclosed city, full of its own collection of ruined temples, the largest and most impressive of which is Bayon. My tuk tuk driver dropped me off there, and allowed me to explore the smaller ruins spread out within the walls of Angkor Thom. It was here, wandering through the rainforest and getting lost inside the deserted temples, that I really felt the awe and wonder that comes with the history behind these epic structures. While Angkor Wat was originally built as a Hindu palace, Bayon and the rest of Angkor Thom were Buddhist monuments. I still struggle to get my head around the specifics of the history, a tale riddled with kings, conversions and a host of sects within the two religions, even after a later visit to the Angkor National Museum, but for the moment I was happy to just wander through and explore the ancient wonderland.

Inside one of the smaller ruins. 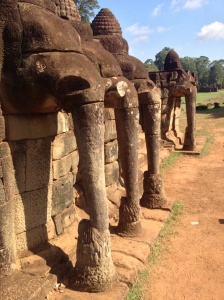 A building colloquially known at the Elephant Temple.

The steep steps of Ta Keo.

Part of the temple featured in Tomb Raider.

Myself with the ‘Tomb Raider tree’.

My tuk tuk taxied me between the rest of the temple highlights, including an unfinished temple called Ta Keo, which lacked the detail of some of the other temples but whose steep staircases provided me with my daily exercise, and a dilapidated compound which I believe was called Ta Prohm, which contained several areas that were the location for the filming of Tomb Raider. Many of the temples were in poor condition, with parts of them closed off to the public due to reconstructions that were underway, but they were nevertheless an impressive sight. I was told by my mother that most people allow three days to see the temples. In Bangkok, Brendon had said one day was enough to see the best bits, unless you were truly mad about temples. In the end it wasn’t even midday before I decided to wrap things up at Angkor Wat. Between my afternoon visit, and having been awake since before sunrise, I had grown exhausted, and I also felt like I had seen quite a lot of what the area had to offer. Of course, there were more temples, but as my time in South East Asia was drawing to a close, I decided I had seen enough temples in the past six weeks.

Having said that, the temples of Angkor Wat really are something entirely different and special. It might have been checking off another box on the list of things to do in South East Asia, but it was definitely more than that. It’s an ancient and marvellous wonder, and one of the few things in this part of the world that could unquestionably be classified as a must see.

NB: While I tried my best to learn the history of the temples that I visited, it was long and complicated, and I can’t guarantee that everything I’ve said is correct, especially regarding what these temples were used for in previous ancient cultures. For more reliable facts on these things, please continue your research elsewhere