Austin is the state capital of Texas, which meant that – with the exception of my bus passing through Baton Rouge – it was the only state capital that I had visited so far, since Washington D.C. isn’t technically a state. Which meant that it was my second opportunity to catch a glimpse of one of these babies.

Even though I’m sure popular opinion would rate the live music, bar scene and creative culture as one of the major attractions of the city, I made sure that I spared a bit of time to check out the more historical and traditional attractions in Austin. While I didn’t bring myself to actually go into the museum, I did spend an afternoon wandering up the main street and onto the lawns of the Capitol building, admiring the beautiful scene and examining some of the statues.

The scene of at the Texas state Capitol building.

As I read the inscriptions around the statues, I began to fill in some of the gaping holes that existed in my knowledge of American history. I mean, I don’t want to sound too ignorant, but all that I really knew about modern American history was what I had picked up from TV shows, movies, or other pop culture references. As an Australian, all I could really tell you is that slavery was common in the South and that there was a Civil War. So that day I learnt about the Confederate, and just exactly what the Civil War was all about, as I circled the memorial that listed the Confederate states and the casualties of war. I won’t go into it too much because hey, this isn’t a history blog, but it was quite a sombre afternoon of learning, consideration and reflection, which I guess served as a nice contrast to the rest of my time in Austin. 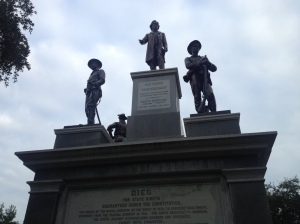 Memorial Statue by the Capitol building.

Later during the week I walked through the same part of town during the evening, to meet Aaron and some of his friends for drinks, and the whole scene had a difference aesthetic. The building looked a little whiter, and a lot more majestic as it was lit up and set against the dark evening sky. 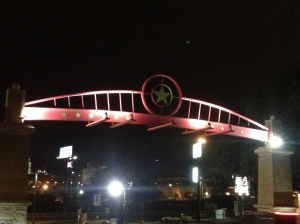 I did wander the streets of Austin a few more times throughout my stay, popping into souvenir shops and examining all sorts of wares with “Keep Austin Weird” sprawled all over them. But the cancellation of Alyssa’s trip to Austin and the fact that Aaron had to work meant that I had a lot of time to myself, and I actually had a lot of planning to do. It was already November, which meant I only had 6 weeks to cross the south-west states to California to catch the flight out of Los Angeles that I already had booked. There were quite a few things I wanted to see along the way, which required a lot of planning, booking of bus tickets, and searching for and messaging Couchsurfing hosts. It was also around this time that the U.S. was experiencing what was dubbed the ‘cold snap’ at the time.
Oh, it actually looks nice and sunny outside today! I remember thinking to myself, only to step outside without checking the actual temperature to discover it was a nippy 4 degrees! Needless to say, I ducked back inside to change into jeans and a sweater before I’d set two feet out the front door.

And eventually the time came for me to leave my wonderful host Aaron and the super cute Sergio for my next travel destination. It was a Thursday night – a full after I had first taken my clothes off for money at Oilcan Harry’s – when I climbed aboard another Megabus service that would be taking me to San Antonio. It was an enjoyable and – despite the near alcohol poisoning – memorable week, and I’d like to think I played my part in keeping Austin sufficiently weird. 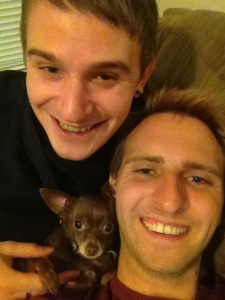 Sergio, Aaron and I.