So while I didn’t end up going back to New York via Philadelphia, I did jump at the opportunity to visit another city along the eastern coast of the United States. That was one thing that I loved about the US – in most places you can just jump on a train or drive a short distance and suddenly you’re in a whole new city, or even a brand new state. In Australia there aren’t a huge amount of cities or towns that are really worth visiting, for purposes of tourism at least, and the ones that are worthwhile going to are separated by miles and miles of desert and bushland or the vast, bleak expanses of suburbia. Thought I’ve heard of American and Canadian tourists visiting Australia because of that exact reason – to see the expanses nothingness – so I guess it’s only fair that I was fascinated by the exact opposite. Mike had gotten up early to head to university, but on this particular day I managed to pull myself out of bed at a reasonable hour, get ready and head down to Union Station, where my bus from New York had dropped me off and where my bus back to New York would eventually leave from. Today, however, was all about the spirit of the day trip. I was heading to a city that I had often heard about, in song (thanks to Hairspray) or otherwise, and where one of my favourite bands (All Time Low also created For Baltimore) hailed from, but somewhere I had never actually visited: Baltimore.

There is a service called the MARC train that connects Baltimore to a number of different places, one of them being Washington DC. The journey only takes approximately an hour, and the train is actually used by a lot of commuters who make the trip on a regular or even daily basis for work. As a result there is a high concentration of trains in the mornings and evenings, around peak hour when the regular commuters need to travel. I obviously wasn’t awake for the morning peak hour, so I planned to catch one of the less frequent late morning trains, and arrived in Baltimore when the sun was high in the sky. When I made it outside of the station, I found my bearings and headed towards the harbour, the focal point of the city of Baltimore. The surrounding city itself wasn’t anything too spectacular or different – just a regular American city with houses, apartments, churches and shops. But after about 20 minutes of walking – the further south I got and the closer I got to the harbour – the city seemed to swell up around me and the air of suburbia gave way to what felt like a city centre. Out of the high rises came a business and tourism centre, and after passing through a couple of streets that were like huge concrete hallways, I stumbled on a gorgeous view of the waters of Baltimore’s Inner Harbour. 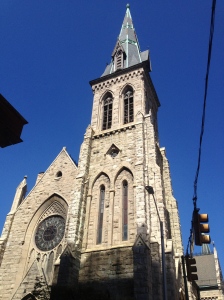 A church on the streets of Baltimore.

The first thing that comes into view when you step into the the sunshine at Inner Harbour is the USS Constellation, probably the most impressive looking of the handful of historical ships that are scattered around the harbour in Baltimore. I walked past it, but instead of going on board for a tour of the ship I kept walking towards the Baltimore World Trade Center. It was the tallest building around the harbour, and it also claims the title of the tallest regular pentagonal building in the world. At the top there is a viewing platform called ‘The Top of the World’, so I purchased a ticket and went on up.

The view from ‘The Top of the World’ in the Baltimore World Trade Center.

From the top you could see out into the horizon and the harbour that stretches out into the wider bay, and all of the surrounding city. There was also a lot of exhibits and notices about the history of the city, so I spent a little bit of time wandering around and reading. I also learnt a little more about the initiative in the city, in the harbour just south of the World Trade Center, to create or ‘build’ a wetlands using a collection of environmentally friendly floating frames. The grass growing in the frames is expected to help gradually clean the the waters of the harbour, and the underside of the wetlands will eventually develop into a habitat for small marine creatures such as crabs, eels, fish, worms and barnacles. Even trash from the harbour, such as plastic bottles, will be embedded into the structure to help it retain buoyancy, and the whole thing seemed like a cool little project that was creating a thriving ecosystem that would even help keep the wider environment clean. 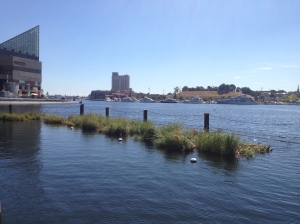 The floating wetlands in Inner Harbour.

I returned to the ground level to see the floating wetlands close up, and then continue my walking tour around the harbour. It was already well into the afternoon, so I stopped for some lunch. After deliberating for far too long about where I was going to eat I finally chose a place at random, but making sure that they offered some kind of seafood, as I had read that it was somewhat of a specialty here in Baltimore. Unfortunately, I’m not the biggest fan of seafood, particularly fish, but instead I opted for a Baltimore classic: crab cakes. They were the only other kind of seafood that was within my budget, but I have to admit they were absolutely delicious. Since I was eating solo, all throughout the meal my server would occasionally swing by and chat with me, and ended up asking where I was from and what I was doing in Baltimore. In the end, when he was fixing up my bill, he tried to offer me some tips or advice for anything to see while I was in town.
“There’s the aquarium just over on the other side there,” he said, pointing to a near edge of the harbour.
“Tell him to go to Fayette Street, man,” one of the other guys working there called out to him. “There’s nothing else worth doing here during the day.” He chuckled to himself, as did my server, but he looked a little too embarrassed to elaborate on what his co-worker had been talking about.

The complex of shops on Pier 4 in the harbour.

I walked over to the aquarium and had a look around on the inside. It seemed pretty cool, but it was such a beautiful day that I didn’t really feel like going inside – I’d spent quite a lot of time in the museums back in DC – and watching a huge group of school children marching into the aquarium was definitely enough to put me off following them in. So I walked along the walkways between the harbours piers, soaking up the sunshine and enjoying the breeze blowing in from the bay, and the gentle sounds of lapping water all around the harbour. After a few absent-minded turns I found myself heading back into the city, away from the harbour, and another random turn had found me on, lo and behold, Fayette Street. I could now see why the guys from the restaurant had sniggered a little at the recommendation – it appeared to be Baltimore’s answer to the Red Light District in Amsterdam, despite it being in the middle of the day. Yet there were no illuminated windows or coffeeshops like there are in the eccentric Dutch capital, just a few oddly located sex shops and a bunch of men trying to coax me down into their strip clubs where they claimed there were plenty of hot naked girls for me to see. It was my turn to chuckle to myself as I walked on past the clubs, ignoring their catcalls, though I was actually quite amused at one of the remarks made by one of the men as I walked past his club without a single hesitation in my step: “What is that in your ear, anyway? A goddam pencil?” It was a reference to my earring, a fake stretcher fashioned into a large blue spike. I probably laughed out loud, but I didn’t stop or look back.

View from inside the fountain on the harbourside.

I spent the rest of the afternoon just wandering around the centre of Baltimore, browsing through shops and exploring the nooks and crannies of the area. The theme of the city seemed to largely revolve around water, with the seafood and the boats and the fountains that you could walk under when they were built into the designs of some of the mall complexes. It was pretty interesting, though from what I had heard, and now seen, the city is definitely a location that thrives more during the evening that the daylight hours. Unfortunately I hadn’t been able to find a place to stay in Baltimore, even for just a night, so as the sun began to sink towards the horizon I made my way to one of the MARC stations – luckily at this time there was one going back to DC from the station much closer to Inner Harbour – and boarded the train back to Washington to spend another night relaxing with Mike. My visit to Baltimore wasn’t wild or exciting, but it was still a pleasant excursion for the day, and it checked off another city and another state in my list of places that I had visited on my journey.