After a light late breakfast at the apartment with PJ, Tony and Nasser – and a bit of playtime with their adorable pooch, appropriately named Toy – I bid the Frenchmen farewell as I headed back to my hostel. Check out was at noon, and I was desperate to not have a repeat of the incident that happened in my hostel in Moscow. Nasser got a little sentimental – I’d learnt that the French can get very intense and passionate very quickly – and even invited me to visit and stay with him at his place in Nice. While the south of France hadn’t featured as a stop on my itinerary, the thought of it sounded marvellous, so I told him I’d see if I could work it into my travel plans, and that I would keep in touch either way. 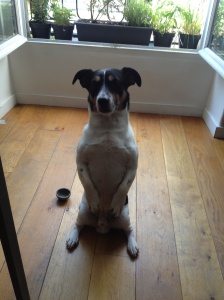 Toy trying in vain to get a share of my breakfast.

My plans for Sunday afternoon were a little different from anything a tourist would be doing, or indeed even a traveller. When I arrived at Greg’s apartment – a beautiful, classic apartment complete with a gorgeous view of the Parisian streets below and an elevator that was smaller than an airplane bathroom – he told me he would be meeting some of his friends to chill out in one of the many parks around the centre of France. Normally I would have jumped at the offer, but there was something else I was looking forward to, so Greg and I left his place together but went our separate ways – him for his friend, and myself for my family.

The view of the streets from Greg’s apartment.

It’s not every day that you accidentally end up in the same foreign city as some of your relatives, so it had been quite a surprise when I had seen my Aunty Therese posting photos on Facebook of herself, my Uncle Jason and my cousins Sophie and George, in England. They’re also Sydneysiders, it seemed that our European holidays had conveniently coincided, and the four of them had landed in Paris on the Saturday that I was there. They were renting out an apartment through Air BnB for their stay, and after coordinating schedules with Therese, I made plans to go over and visit them for some Sunday afternoon drinks.

It was a beautiful sunny day, and the parks had been full of people, locals and tourists alike, lounging around on the vast green expenses and soaking up the European summer sun. I would later joke with my friends that I had a better tan after a summer in Europe than I ever had during any of my summers in Australia. While Australia’s UV levels inevitably scorched to a crisp anyone who stayed in direct sunlight for over 30 minutes, I found European sunlight to be the equivalent to Mama Bear’s porridge in Goldilocks and the Three Bears – it wasn’t too harsh, but it wasn’t too weak that it couldn’t warm you up: it was just right. The sight of all the sunbathers made me realise something else too: in a vast city where there was just so much to do, one also needs to schedule in time to literally just do nothing. To sit, to relax, and soak up some Vitamin D – things like that are just as important in a holiday, in my opinion, and you don’t get the time to do it if you’re too busy rushing around trying to cram in as much as you can. It was a revelation I would inevitably revisit many times throughout my journey.

A gorgeous day over the river Seine.

Hôtel National des Invalides – passed on my way to Jason and Therese’s.

Once I reached Therese and Jason’s apartment – located quite centrally, near the Eiffel Tower – we cracked open some drinks, and all of a sudden we could have been back in Sydney, enjoying some sunshine on the back verandah while catching up over a family drink-together (what my extended family calls get togethers). Therese had been keeping up with my blogs, though they weren’t up to speed with real time, so I caught her up on some of latest adventures, and all about the pride festivities the day before.
“Yes, well, we couldn’t have timed that one better ourselves”, she said with a laugh as she sipped her beer. “Yesterday afternoon – took us about two hours to get a cab. Jason was about to lose it!” I couldn’t help but giggle at the mental image of my uncle staring incredulously at a main road full of parade floats and near-naked go-go dancers, searching in vain for a cab to get his family out of the madness. “But what are the odds of landing in the city smack bang in the middle of a gay pride parade, right?”
“Well, unlucky for some, but very lucky for others”, I said with a laugh.

Jason and I toasting to our European travels.

Jason was in a better mood than he supposedly was the day before, when he arrived back at the apartment with bread, cheese, wine and more beer. As impressed as I thought my male relatives would be with the fact I was now a beer drinker, instead we indulged in the fact that we were not in an Australian backyard as we ate three kinds of cheese and said a toast with the sparkling wine: “Viva la France!” Though it really was lovely to see more familiar faces, and to even relax into a relatively familiar setting – it was just enough to ward off any homesickness that could have started creeping its way in after three months on the road. We sat in the afternoon sun and stayed there well into the evening, sharing holiday stories and working our way thought the food and drink until it finally became full dark. And that was when the Eiffel Tower begins to sparkle.

“Sophie! George! Quick, come look at this!” Jason called out to my younger cousins. From a particular vantage point of their balcony, we could see the upper reaches of the Eiffel Tower through gaps in the surrounding buildings. At night the Eiffel Tower lights up, but once an hour, on the hour, she puts of a show. What look like hundreds of fairy lights all begin to glitter and flicker against the dark night sky. Walking through some of the smaller streets on my walk today had been enchanting, but this was a sight that, when seen for the first time, felt truly magical. The five of us stood on the balcony watching the tower until the glittering eventually flicked off, and I felt that finally the City of Lights was proving itself worthy of its name.

The Eiffel Tower sparkling in the distance.

Eventually I had to head back to Greg’s. I thanked Jason and Therese for having me, wished all four of them all the best for the rest of their trip and then stumbled into a cab to head home, but not before stopping for a quick photo of the Eiffel Tower at night. I didn’t have time to stick around to see it sparkle again, but gentle glow itself is enough to create a distinct ambience in the area that feels so ingrained that it would be almost impossible to imagine Paris without it.

Nighttime view of the Eiffel Tower from the Champs de Mars.

Drunken selfie with the Eiffel Tower.

My last day was my final day of sightseeing, and then having dinner with Greg and one of his friends at his apartment before gathering my stuff and heading for the train station. That proved a little stressful when one of the metro lines I had intended to take to the station was experiencing a partial closure, and I had to frantically call Greg to try and figure out an alternative route. The only alternative appeared to be covering some of the ground by foot, so I was barging through the streets and waving my ticket around, desperately trying to find the terminal as fast as possible once I finally reached the station.

Of course, this was France, so things weren’t running on time and I made my train with time to spare. But as the train pulled out of Paris and headed south, I couldn’t help but smile, intensely satisfied with my time spent in Paris. In just four short days I’d seen the sights, I’d experienced the parties, caught up with old friends and family and made new friends, future friends who I would hopefully see again one day.

1 thought on “A Family Affair”