While my days in China were spent doing typical tourist activities, at night Snow took us out to eat at some authentic Chinese restaurants. Most of the waiters at the places we went to had fairly limited English, so we had to rely on Snow to do all the ordering. We ended up getting a range of dishes and splitting between the group – it was amazing how much food you can order for a group of thirteen and still only end up paying approximately $7 each. Needless to say, nobody went hungry, and I feel I can safely say that some of the best Chinese food I’ve ever had, I had in China.

One thing that made me uneasy at first, however, was that Snow ordered a chicken dish. Alarm bells went off in my head immediately – all throughout my travels in South East Asia I had been following the news and tracking the progression of the new strain of bird flu. At the time I arrived in China, I knew there had been the most cases in the city of Shanghai, and even a few confirmed reports in Taiwan. Some people had suggested I not go to China – others, including my mother, had just strictly warned me to stay away from live poultry and to not eat any chicken. At this point in my trip, I can safely say that I am yet to handle any living poultry. As for eating chicken… well, to be honest, I completely forgot. The alarm bells didn’t go off until after we’d finished our meal, at which point I had eaten a substantial amount of chicken.

But so had everyone else in the group, and no one seemed to give the danger of bird flu the slightest thought, and if they had then they certainly hadn’t mentioned it. Snow hadn’t seemed too concerned, so I took that as a good sign – I figured the local people tend to know more about what’s going on in their areas then CNN, although with China you never really do know…

Tim, one of the Australian guys, had been travelling throughout China for the last three weeks on a different tour before joining our group. He was telling us a few stories about his travels and some of the places he had been, and at one point mentioned something about Shanghai. Alarm bells did instantly go off this time, and when he finished his stories, I leaned over to have a one on one conversation with him.

“Did you say you were in Shanghai?” I asked, trying to sound casual.
“Yeah, probably about a week or so ago.”
“For how long?” I continued to quiz him, with the nonchalant façade probably failing miserably.
“Just three nights,” Tim replied, quite matter-of-factly. I thought maybe the direction I was going might have been apparent, but he didn’t appear to have any idea where I was taking the interrogation. I leaned over further and spoke a little quieter, suddenly feeling a little silly about my paranoia.
“What about bird flu?” I asked in a low, hushed voice.
“Bird flu?” Tim repeated. “What about it?”
“Wasn’t it a problem? Like, weren’t you kinda scared going through Shanghai?”
He looked genuinely surprised, or at the very least confused. “Umm… No, not really. I mean, it might be around, but… no, I wasn’t worried. It’s mostly fine, really.” His tone carried the nonchalance I’d tried to attain in my original question, and I very much believed what he was saying.

So between Tim having survived a visit to Shanghai and our entire group eating chicken seemingly without a second thougth, I decided that perhaps bird flu wasn’t as much of a serious concern in Beijing as my loved ones would have me believe. I know most of them will be reading this either sighing, face palming, or rolling their eyes, but in my opinion it just really shows how a little bit of media hysteria can go a long way, and terrify the on-lookers more than the people actually living the experience.

The other part of Chinese night life I experienced was the Hou Hai Bar Street, where a bunch of different small bars lined a riverside street. I visited the street after dinner on our last night in Beijing with Tim and Alyson, the other American in our group. As we strolled down the street trying to decide on a place to have a drink, Tim made a comment on how unlike the rest of China this street was, or more precisely, how much American influence there was. Almost every bar had live music and karaoke, with many of them butchering Western music with their limited English vocabularies. Most bars had people outside trying to beckon you into their venue, but we kept walking until we found a place that lacked the hecklers. We ended up taking a seat at a Jamaican bar, sitting outside so that we could hear each other talking over the live music inside, and sampled some of the local draught beer. It was nice to get to know some more members of our travel group, though we didn’t end up staying out too late, as we had to get up early to get the train to Mongolia the next morning. But it was nice to catch a glimpse into the Chinese nightlife. 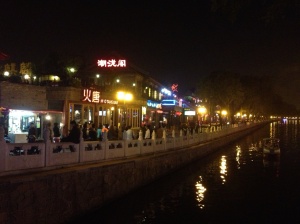