After four weeks on the road, it’s safe to say I’ve seen quite a bit and had some new worldly experiences. However, something I never expected was that travelling by myself would play such a crucial part in the way that my journey unfolded. At the time of planning all I envisioned was complete, unbridled freedom. While that still might be true, travelling alone isn’t without its drawbacks, a few of which I am slowly learning to navigate.

Perhaps the first time the realities of traveling solo really hit me was when I was waiting for my train south to Krabi, sitting at a table on the elevated café level of Hua Lamphong Railway Station in Bangkok. All around me, I saw so many travellers in pairs: whether they were partners or friends, or sometimes even groups of three or four, almost everybody had somebody. And that started to make me feel a little lonely.

And I don’t necessarily mean the ‘longing for human contact’ kind of loneliness. It’s the practical advantages of having a travelling partner that I really began to notice when I was finally by myself. For example, I had an hour and a half wait at the train station. There was no table service in the area I was sitting in – if I wanted to order food, I would have to pick up my bags and take them to the counter with me. If I wanted to go to the bathroom… well, I couldn’t. Unless I either hiked in there with all my bags or left them out in the open when I went, completely unattended.

Luckily I didn’t need to use the bathroom, but it just made me realise how much easier some things are when you have a traveling partner. Initially I was quite drawn the freedom of being able to do exactly what I wanted and travelling whenever I wanted, but when you’re making these grandiose plans, those little details are often the first thing you lose sight of. They say that solo travelling can be much cheaper, but even that freedom still comes with a different kind of cost.

When I was on the beach at Ao Nuang beach at Krabi, I had no choice but to leave my bag unattended. It probably probably says something more about my paranoia or anxiety that I pretty much backed into the ocean, facing the beach, so that I could keep an eye on my belongings. But you loosen up eventually, for better or worse, and in the end you just have to calculate the risk and do your best to enjoy whatever it is you’re doing. And I did, eventually. Train stations are very different settings to beaches, and there was just the right amount of people present on the sand for me to feel more comfortable about walking away from my bag – enough people to be witnesses to a theft, but not enough for a thief to be lost in the crowd.

When I was at Rai Leh, I was able to ask Sam and Sarah to watch my bag while I went into the ocean. But eventually they wanted to swim as well, so we all just had to leave our bags in a cluster on the beach and keep an eye on them every now and then. Although again, maybe that’s my paranoia talking. As we walked out of the warm Thai water, Sarah peered out onto the vast expanse of sand and asked “Where are our bags?” We’d floated a little way down the beach, but I was immediately able to point out the location of our belongings. Seems not everyone is so highly strung as me when it comes to the location of their valuables.

Then there is the freedom of travelling solo – both a blessing and a curse. For starters, I know that had I not been travelling alone, I probably wouldn’t be on this mammoth nine month journey. Most people don’t have the time, or have too many commitments to take such a long term vacation from their real lives. But I did, so I set out with the intention of not letting anyone get in the way of doing exactly what I wanted to do.

But I felt it was impossible to plan an entire nine month holiday completely in advance, so I left a lot of the fine details up to chance and circumstance. Booking hostels and overland transport as I go, seeing wherever the wind takes me – it sounds like the ultimate travellers dream. I know for a fact I wouldn’t have done half the things I’ve done so far if I’d brought a travelling companion from home – beers with the British boys in Thailand, Couchsurfing in the Vietnamese slums, being sexually harassed by a monk, or even the SCUBA diving tour that I booked myself into on a last minute whim.

Then there’s even the freedom to do nothing. Those days or nights when you’re just too exhausted, and all you want to do is sit in the hostel and read a book or make a Skype call. You don’t have to make excuses to anyone or apologise for not going out and having fun. I accept the reality that out of my 275 days of travel, not every single one is going to be jam-packed with activities.

Yet this does run the risk of complacency. In a brand new city with so much to explore, after a few a days you can easily become overwhelmed. With a travelling partner, you always have someone else’s energy to bounce off and keep ideas coming, always planning something to keep the ball rolling. By yourself, it’s easy to feel at a loss, and waste days trying to decide what to do. I thought that hostels would help with this – it certainly did while I was in Krabi – but of the three nights I’ve spent in my hostel at Ho Chi Minh City, for two of them I’ve been one of two people staying in a 9 bedroom dorm. The other guy hardly speaks, and has spent the entirely of his time in the room editing videos and photos on his laptop. So it’s really up to me, and me alone, to get out there and explore this big city. 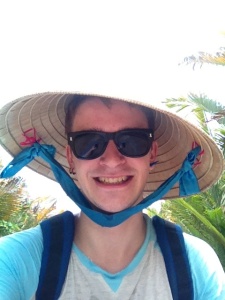 Being alone gives you a lot of time to think, which is also a problem. You end up thinking about home, and things and people that you miss in that state of loneliness, when you know you should be out there having fun and exploring the world. But I hope that writing about this will be cathartic in some way, so I might be able to let go of these difficulties in travelling solo and to fully appreciate the experiences that I’m having.

The weekends coming up, so I’ll probably hit the nightclubs and use alcohol as a social lubricant and find some new people to hang out with. No matter where you are in the world, some things never change.