My first weekend in Bangkok felt like a throwback to my previous lifestyle in Sydney – you can take the boy from the party, but you can’t take the party from the boy. 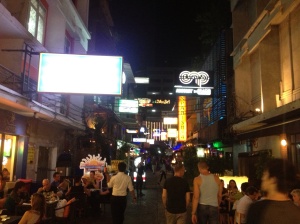 Silom Soi 4 on a Saturday night.

Earlier in the week, Rathana had put me in touch with a few of his friends in Bangkok, and they had agreed to take me out and show me around while he was still in San Francisco. After dinner, and several jugs of margaritas, I found myself back at Silom Soi 4, though it was a Saturday night this time so the street was a little busier than last time I’d been there. The four guys I was with were all good friends, a couple of them having known each other for nearly as long as I’ve been alive, but they were fantastic company and welcomed me warmly into the group. Conversation was flowing fast and freely, and it usually does between such good friends, and I was privy to some hilarious, provocative, and thoughtful conversations. One in particular that I want to reflect on was a topic that was sparked when we spotted a peculiar couple on the other side of the street. One half of the couple was a young Thai boy with pretty, delicate features – I’m terrible with guessing, ages but I’d say somewhere in his mid- to late-twenties at the most. The other man was older… much, much older. I’m no stranger to age gaps in my relationships, but even I have to confess to feeling a little uncomfortable watching these two canoodle on the balcony of the bar.

Some cheeky remarks were made about the couple couple, and the discussion about such pairings being a common occurrence in the area turned to questions of why they occur in the first place. One of our group, who has only just recently moved to Bangkok himself, suggested that some of the younger local boys were almost driven to those types of relationships due to poverty, while the older Caucasian gentlemen use their wealth to effectively buy affection. In response to that suggestion, one of the guys – who we shall call ‘Anna’ – made a point that I personally had never really considered.

“The definition of love in their culture is very different from our Western ideas of what love is supposed to be. For them, love is about taking care of someone, or them taking care of you. I wouldn’t say that they’re driven to these relationships, or even that they’re being coerced, or that these men take advantage of them. It’s just how their culture defines love – they’re in love. Who are we to come in with our Western ideas about love and tell them what they have isn’t normal?”

I paraphrase, of course, but the idea really stuck with me. Even in a Western setting, I’ve had people question the integrity of my relationships with a number of previous boyfriends, whether it be due to ages or otherwise. And the more I thought about it, the more I agreed with Anna. As two consenting adults, these two men have a relationship. Are they in love? Who can say? We didn’t ask them –  I know plenty of people in our own Western society who are in loveless relationships, but seeming a little more “normal” helps them avoid much scrutiny at all. The idea that love means different things in different cultures was intriguing, and while I’m sure there’s a multitude of complexities regarding love and relationships in Thai culture that I have little to no idea about, I think the discussion reaffirmed a value in me that I’d temporarily forgotten – love doesn’t play by any set rules, and there’s no such thing as a “normal” relationship. That particular age gap may have given me the heebie-jeebies, but hey, if they’d said that they were in love, then that would have been good enough for me.

Dancing in a cage in a Bangkok club – don’t ask me which one, because I can’t for the life of me remember.

My period of deep reflection on such complex emotional processes didn’t last long, though. A few more margaritas later and I was ready to hit the dancefloor. I think that’s what I like about a good gay bar – you can be millions of miles away in a foreign city, surrounded by people that you’ve never met and probably never will, but when you’re shaking your stuff on a crowded dancefloor to a Britney Spears remix, it’s always going to feel like home.